Years Of Contradictory Pulls and Pressures 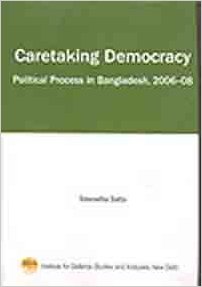 2006 had been a fraught year for Bangladesh. Differences between the two major political parties, the Awami League (AL) and the
Bangladesh Nationalist Party (BNP) that go well beyond democratic discourse has been a constant in Bangladesh for over thirty years. What now lent a special edge was the determination of the BNP to win the elections due for early 2007 at any cost and the manipulations of the system at all levels that followed. With equal determination on the part of the AL and its 14 party alliance that elections would have to be held on a level playing field, the confrontation was absolute and the nation appeared to hover on the brink of civil strife. That is when the Bangladesh army stepped in with the objective of taking care that democracy survived. Sreeradha Datta is a well known scholar on Bangladesh and has a book (Bangladesh: A Fragile Democracy, 2004) and numerous articles to her credit. In her earlier book, which covered a broad canvas, she had pointed out the fragility of institutions and the areas of conflict while expressing cautious optimism for the future.

To many, however, the virtual army take-over on January may have seemed like a replay of past coups and a mirror image of what is regularly played out in Pakistan. While a Caretaker Government immediately prior to elections has been constitutionally mandated in Bangladesh since 1996, it was clear that the Caretaker Government formed on January 12, 2007, while it may have drawn its legitimacy from the constitution, its sustenance came from the armed forces. ‘If technocrats were the mask’, says the author, ‘the military was the substance of the CG (Caretaker Government).’ It would have come as a surprise that the Bangladesh armed forces would deliver on their undertaking to provide for free and fair elections and then return to the barracks.