World Renouncers and Men of the World 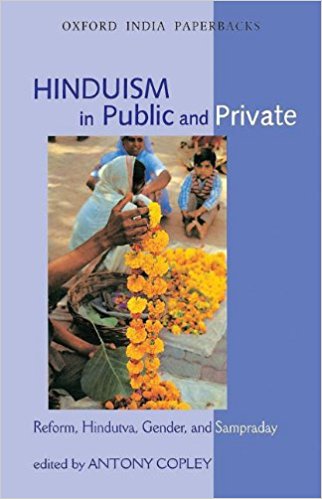 The present work, as per the editor’s own admission, is a companion volume to the one brought out in 2000 under the name Gurus and Their Followers. Apart from including some common authors, the two volumes also reveal strong thematic continuities. Thus in both cases, Gwilym Beckerlegge writes on the ideal of seva [selfless social service], Hiltred Rustau on the emergence of female ascetics within contemporary Hinduism, Harald Fischer-Tine on the Arya Samaj and eminent Arya leaders and Peter Heehs on Sri Aurobindo. Happily, there are also essays that are entirely new such as the two contributions on Mahima Dharma in Orissa, by Lidia Julianna Guzy and Johannes Beltz; the Vaishnav revival in 19th century Bengal by Jason D. Fuller; on the fate of the cow-protection movement in contemporary India by Therese O’Toole and on the Mata Amritanandamayi Mission by Maya Warrier. What is also bound to be of some interest to the reader is the attempt made in several essays to explore the possible linkages between religious reform in the 19th century and the ideology of contemporary Hindutva.

In the present collection, essayists who do examine this problem at any length unanimously conclude that linkages of this kind have been constructed only retrospectively and rest upon a gross misreading and misappropriation of the lives and work of eminent public figures of colonial India. Thus Beckerlegge and Rustau firmly deny the possibility of men like Vivekananda and Aurobindo being forerunners in the revanchist persecution now unleashed upon non-Hindus. Maya Warrier’s essay, which I personally liked very much, demonstrates how many Hindus who now associate themselves with urban, guru-based movements, are not necessarily drawn to the ideology of Hindutva and reveal significantly different perceptions about the social and cultural world of Hinduism.

Limitations of space will permit me to comment only briefly and selectively on the very useful essays put together in this volume. My one major complaint against some of the essayists is that they push their generalizations much too far, even for the sake of theory. Thus Guzi’s claim [p.212] that her study of Mahima Dharma asceticism in rural Orissa made way ‘to the conclusion that the Hindu tradition of renouncing the world is to be analysed in relation to local powers’ is prima facie quite unconvincing . To conflate the structure of everyday relationships between world-renouncers and men of the world with the ideological impulse that brings about renunciation itself is methodologically suspect. In any case, ascetics and renouncers are also known to have lived in a state of tension with secular authority.

In the context of vaishnav reformism in Bengal initiated by the civilian turned reformer, Kedarnath Dutta, Bhaktivinod, Jason D.Fuller argues that the word ‘Hindu’ was often not a part of the active vocabulary of Hindu reformers and that Hindu reform work had an ‘explicitly anti-Hindu’ aspect [p.176]. At first glance, this might well appear to be true since none of the modern reformist bodies chose to put the prefix ‘Hindu’ before their name and traditional figures like Vishnubawa Brahmachari of early 19th century Maharashtra, preferred to use the expression ‘Vedokta Dharma’ [religion originating in the Vedas] or else Sanatan Dharma [Eternal Religion].On the other hand, such preferences were not necessarily anti-Hindu in their intention. In the 19th century, Brahmos, Aryas and other like-minded reformist groups chose to employ nomenclatures that in their opinion, represented ‘pure’ and ‘authentic’ Hinduism, not a surrogate for Hinduism itself. In the case of men like Vishnubawa, the terms ‘Hindu’-‘Hinduism’ may have been all the more suspect since their origins were known to lie in Mleccha or Yavanic usage. Contrary to what Fuller claims, modern reform work postulated at least a conceptual unity of the Hindus. In the 1890s, to cite only a representative example, The Hindu of Madras reprimanded the Tengalai and Vadagalai factions within local Sri Vaishnavism for their recurring doctrinal quarrels, exhorting them to join the new movement towards an unified Hinduism.

Harald Fischer-Tine’s analysis of the two volume Bharatvarsha ka Itihas by the Arya spokesman, Acharya Ramdev, is as original as it is fascinating. However, the essay could have briefly ventured into a comparison of Ramdev’s work with that of the near contemporary figure, R.C.Dutt, who also tried to reconstruct the Hindu past but with interestingly different results. Neither Bankimchandra nor Bhudeb Mukhopadhyaya whom Fischer-Tine mentions in this connection wrote a proper historical work or for that matter on early India. Rustau’s essay on female asceticism tends to overlook the attitudes prevalent in tantric and other antinomian traditions where initiation of men by women was commonplace and which also apparently allowed women greater freedom in spiritual life. Sri Ramakrishna was himself initiated into tantric rites by a female ascetic, the Bhairabi Jogeswari. I am also not sure if the concept of Ardhanariswara, the union of male and female deities, may be entirely explained by the philosophical non-dualism of Advaita Vedanta [p.161]. Hindu concepts of androgyny, mostly based on Puranic myths and psycho-symbolism are perhaps a better source of explanation. Equally doubtful is the claim [p.147] that ‘minor’ Upanishads are the same as the ‘Samnyasa Upanishad’. Whereas there might be a minor Upanishad by that name, all minor Upanishads are not collectively called the ‘Samnyasa Upanishad’. In a volume otherwise so finely produced as this, the few slippages and oversights committed at places, tend to stand out that much more. In the essay by Beckerlegge, citations of Kohli,[1993] and Sen [2000] appear at several places in the text but are not included in the list of bibliographic references, leaving the reader to guess as to what these books might be. In Jason Fuller’s essay, transliterating such well-known names as Benoy Ghosh and Tony K. Stewart into Vinaya Ghosa and Tony Ke. Steuarta was quite unnecessary. Apparently, this is not used by all authors handling Indian language sources. Johannes Beltz’s essay on the Mahima Dharma leader Bhima Bhoi, though very persuasively argued, is one such exception. Finally, Maya Warrier, it seems, got her historical chronology somewhat wrong. Vivekananda himself could not have propagated the ideal of seva ‘in the early part of the twentieth century’ [p.255]; the Swami died rather prematurely in the year 1902, somewhat disenchanted, if I may add, with the work at the Ramakrishna Math and Mission.

Some of my worries, strange to say, are also related to the editor’s introduction. Compared to what he produced in Gurus and Their Followers, Copley’s analysis in the present volume appears less incisive but more caught up in rhetoric. On the question of possible linkages between 19th century reform and present day Hindutva, the editor seems to have been uncharacteristically driven to certain value judgments and sweeping generalizations. If both religious reform and Hindutva seek to ‘harness religion’ in their own ways, why is the latter only a ‘distorted image of the former’ [p.4], I wondered. No less puzzling is Copley’s observation that contemporary India was moving closer to a situation reminiscent of church-state conflicts in 19th century Europe or that the Indian intelligentsia were but ‘embattled anti-clericals’ [p.5]. The reality, as Copley himself is no less likely to know, is far more complex. Finally, I am also persuaded to contest Copley’s contention that Hindutva disowned and distrusted anything originating outside India but fully accepted home-grown products [p.9]. This would be hard to establish given the organizational inspiration that it seems to have derived from Mecca or the Vatican. But even otherwise, his position is hardly tenable judging by the attitude that Hindutva has often displayed towards indigenous religions like Buddhism. In the nineteenth century and thereafter, Hindu reformers and revivalists have held Buddhism responsible for the emasculation of the Hindus, for producing an ascetic, pessimistic, other-worldly attitude and gross sexual perversion through tantra. Happily, my counter-claims are borne out by one of the essays in this very collection. On p.54, for instance, Beckerlegge narrates how Golwalker accused Buddhism of playing ‘traitor to the mother society and mother-religion’.

On the whole, the present collection of essays has to be commended for the sheer intensity of arguments, the wealth of source-material employed and the breadth of theoretical questions that it throws up at various places. After all, follow up volumes too have been known to considerably augment and enrich an older enterprise.