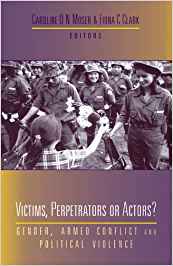 Despite the volumes written on wars and conflicts there has been a vacuum in research that examines the gender aspects of political violence. Most traditional analysis of conflicts had a subliminal masculinity inherent in the texts. This is now being rectified with a surge of new work that inquires into the gender aspects of political violence and armed conflict. Current research looks at the multiple roles that women have in conflict situations from victims, supporters, caregivers, and peacemakers to re-builders in conflict and post-conflict situations. Moser and Clark’s edited volume is a collection of research around these themes, with additional questions that are raised.The introduction sets a tone for the arguments of this collection by stating that while political violence is perceived as male domain, fought and negotiated by men, yet conflict and violence is gendered. Women are perceived to be victims even when they have multiple roles and men are perceived as heroes even when they were victims. There is a clear distinction in perceptions as women’s bodies continue to determine their roles.

Cynthia Cockburn’s essay on “The Gendered Dynamics of Armed Conflict and Political Violence” theorizes gender as an integral aspect of power. Cockburn argues that there is need to look at power relations of gender before, during and after conflict when studying political violence, because the gendered aspect of power shapes every site of human interaction from household to inter-state relations. This is evident in all aspects of how women and men’s bodies are nourished, trained and deployed. In the economy it is linked to how property and distribution of resources and in politics of how political power is controlled. Cockburn then goes on to show the importance of uncovering the gender aspect in conflicts and in peace negotiations.

Cockburn’s arguments that militarized societies are necessarily undemocratic however are not fully accurate. As studies show even democratic systems and societies can have aspects of militarism. This militarization is contested by other ideologies but they nonetheless exist. For instance, take the most blatant example of the USA. The post September 11, 2001, events showed how easily that society constructed an enemy ‘other’, resorted to an exaggerated national security threat, opposed all others who opposed the war coalitions in Afghanistan and Iraq and has assisted in the militarization of smaller and non-democratic states world over. Cockburn’s contribution that shows violence as concerned with power, is a significant contribution in this volume.

Caroline Moser’s essay on “The Gendered Continuum of Violence and Conflict” establishes the linkages between the different types of violence in a society. She categorizes conflict into political, economic and social and then shows how gendered power relations are at the base of all these conflicts. Moser also assesses the costs and consequences of gendered conflict and divides them into the economic, human and social capital. She locates gender and other relations in the impact on social capital and shows how violence erodes this. Moser’s extensive work on gender and conflict in Latin America, is highlighted in another essay with Cathy Mcilwaine specifically on “Gender and Social Capital in Contexts of Political Violence” where the authors argue that gender violence erodes social capital. They also suggest ways to reconstruct societies that have been through long periods of political violence.

Rape and sexual abuse are analytically viewed in a number of essays. Meredith Turshen looks at victims of rape during conflicts in Africa and Antjie Krog while looking at the process of the Truth and Reconciliation Commission of South Africa also reveals deeply painful insights of rape victims. These writings show how rape is an instrument not just of humiliation of the victim and her community but an instrument to ascertain the rights of power over the other. This act makes women lose their standing and position within their community and endorses and enforces gender roles. It plays a role in ethnic and racial stereotyping and focuses on dominant sexuality in power and relationships. An equally moving essay is by Dubravka Zarkov examines how gender, sexuality and ethnicity constitute each other in the media representation of sexual violence. She looks into the widespread sexual abuse of men during the ethnic violence and breakup of Yugoslavia and establishes how manhood also involves the victimization of other men.

Several essays on agency of women through political activism, building peace movements in sites of conflict like Palestine, North Ireland, look into the practical work of women during these sad and long conflicts. Urvashi Butalia writes on sexual violence in the many communal conflicts that have mangled India’s political history, beginning from Partition, to show women both as victims and also their agency in joining anti-communal and anti-fundamentalist movements.

Several of the essays uncover truths and record women’s voices during and after conflicts. The stories told by Ana Christina of women in El Salvador, are heartrending enough to show the burden of pain and trauma that women bear during conflict and how deeply it tells on their children. Terror for ordinary citizens in states like Columbia and Guatemala where violence has become endemic has many sources. It comes from armed gangs, inter gang rivalries, political organizations, the police, the paramilitary and the state. For women this terror translates into violent incidents in the home by loved ones and in the public spaces by the state and the private militia. There is thus a continuum of violence that extends from the private to the public, at times of conflict and post-conflict.

The importance of this collection is in the levels of analysis for a gender perspective that focuses on differentiated personal experiences of violence and the transformation of roles and identities at such times. Thus men and women deal differently with violence, trauma displacement and terror and these differences are located in the public/private dichotomy. One interesting fact brought out by several of the essays that deal with the agency of women and post-conflict re-construction is that women unlike men, seem to gain some autonomy and visualize changed perspectives for their life projects. It further establishes that identities are not static but constantly being constructed, categorized and mobilized.

This is indeed a valuable volume that adds to the literature that corrects understanding of political violence and conflicts. It adds theoretical insight to not only women’s studies but to social science literature as whole. The analysis of power as a gendered construct and the gender differentials as levels of analysis are the new terrain that this volume introduces. Since this volume is now easily available in India, it is a useful reference for those who would look for deeper analysis into conflict, gender, violence and society.