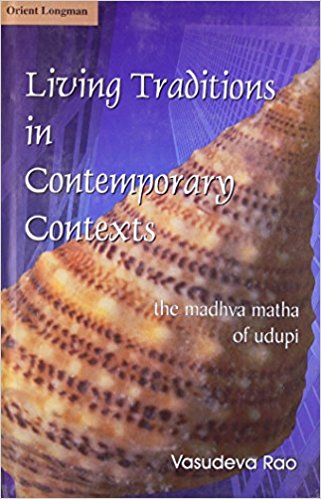 The Madhva Matha of Udupi, founded by Madhvacharya, the proponent of the dvaita, is a fascinating institution. It is an octagonal arrangement where eight Mathas (or Matthas, as pronounced in Kannada) taking their names from villages near the temple town of Udupi have the right of conducting worship in the Krishna Temple by rotation. The Krishna idol was installed by Madhvacharya, who blended philosophy with bhakti, to propel a religious sect, distinct from the advaita propogated by Adi Shankara and his Mathas spread across the country. Unlike Shankara, the reach of Madhavacharya is confined to southern India, though modernization and urbanization have now made the upwardly mobile Madhwas set up their temples in India and abroad, as has happened to other Indian religious sects. The Udupi Mathas have also been in the public eye because of the activist role of Swami Vishwesh Thirtha, the head of the Pejawar Matha, one of the Astha Mathas. He is in the Margadarshak Mandal for the Ram Janma-bhoomi temple, has the top leadership of the Bharatiya Janata Party and Vishwa Hindu Parishad among his followers, he trod a new path by visiting homes of the people who were once regarded as untouchables, he gave sanyas diksha to a woman politician. Compared to the high profile of Vishwesh Thirtha, the other seven pontiffs have not been in the national limelight.

Vasudev Rao, is a scholar who combines his training in anthropology with personal knowledge of the Madhva faith by birth and practice. His is the researcher’s eye and ear which is sensitive to look for the changes amidst the rigours of tradition in a highly developed segment of Indian society. He devotes his attention to painstakingly chronicling the details of the rituals, traditions and precedents of the Krishna Matha, even as his eyes and ears record the way the Mathas, their pontiffs, and lay followers adjust to the changes in society. He deals with the controversies which have embroiled the Mathas, but avoids sensationalism. Instead he looks at these controversies, like the abdication of the post by a swamiji who preferred marriage, or the controversy over the foreign trip of a junior swamiji, and tries to find whether the Mathas are clinging to old formulations or whether they are reforming. He is neither a blind follower nor an iconoclast. Instead he is a scholar who accepts that the Matha is a living institution which is considered as necessary for spiritual and community bonding purposes by its followers. Rao notes in the introduction: “Life in the Udupi matha juxtaposes in itself a series of heterogeneous moments, some steeped in tradition, others, an expression of modern times and means. Together, these make up the larger world view of the members. In this situation, one cannot expect a tradition devoid of modern meanings, nor modernity bereft of traditinal moorings.”

Thus Rao devotes the first part of his inquiry into understanding what makes the Krishna Matha tick. He researches the routine of the Matha, the architectural layout of the temple, the daily rituals of the presiding pontiff, the role of the stray sanyasis, the grihastha (family attached ) scholars, the devotees who have no special knowledge of the scriptures or the rituals and also the hierarchy of administration. He gives a comprehensive idea of how the eight Matha concept was evolved by Madhvacharya and how these Mathas have been coping with shrinking land resources, increasing role in temporal affairs and how they look at the challenges of modernity.

Rao rightly devotes a chapter to what he describes as the gastrosemantics of the Udupi Krishna Matha. Food in the form of prasada (offering partaken by the sanyasis and devotees) is an essential part of the Madhva tradition, and the kitchen occupies a key place in the scheme of things. This is because there is a theory that one of the chief attractions of the Madhwa sampradaya was its celebration of the taste buds, compared to the ascetic and sometimes self-denying rigours of advaita, as practised by Adi Shankara’s followers ten centuries ago. Advaita demanded too much of renunciation and too much of punishment to the body like cold baths and fasts. But the Madhwas are the ones who love rich food, and Rao wryly notes the above average composition of sweets and fats in the prasada partaken by the devotees of Madhvacharya has perhaps led to more cases of diabetes. Thus food has not only its own special importance, but is a determinant of caste and sub caste heirarchy. Rao does not mention that udupi hotels are the most popular vendors of south indian vegetarian food throughout the country.

Rao devotes his energies next to the cultural production of knowledge, where he discusses the relevance and importance of the teachings of the great teachers from Madhvacharya and to the latest writers. He also finds out why the definitions of god and man are different from the Advaita sect, and how Madhwa scholars are encouraged to understand and then demolish the theories of Adi Shankara and his followers. The rigours of scholarship needed to master the texts is described in detail and there is a discussion on why women are discouraged from becoming scholars as well as the male dominance of the sanyasi regime. But the scholarship of the pontiffs is also used to keep the devo-tees, who are more swayed by the needs of bhakti and adherence to tradition, also in the loop. This is where the upannyasas (public discourses) given by the pontiffs are essentially a tradition enforcing as well as all embracing acts of religious propogation for the pontiffs.

Rao also discusses the merits and demerits of sanyas, especially the practice of initiating sanyasis at a very young age—just after the upanayana (thread ceremony). He finds out that there is not much support to the idea for appointing householders as pontiffs, though these householders are free to take sanyas and be unattached to any Matha. Rao concludes by discussing the increasing interest taking the pontiffs and the heirarchy of the eight Mathas in political and social life. “The conceptualisation of hindutva by the udupi sanyasis” and other members of the sect is neither a violent stand against the Muslims (politics of the nineteenth century) nor is it the process of recuperation of the lost masculinity by positing a “generalized Opedial relation between the Mother-nation and her sons”. It is the concern with the decline of the Brahminical social order that has prompted some of the saints of the matha to forge an alliance with modern political parties. This alliance alters the traditional role played by the pontiffs of the matha and permits a greater understanding of their own relevance and status in the con-temporary world.”

In Rao’s view the flexibility of the living traditions to adapt and change is not a corruption of tradition. Instead it is more profitable to see tradition being carried for-ward with certain traits of modernity. “This forward movement displaces any under-standing of tradition as static or frozen. Thoughts and ideas do not exist independent of society, closed within texts. Ideas penetrate society and social relations, and these in turn penetrate ideas”. Rao’s scholarship is enhanced by a lively writing style as he provides an exhaustive insight into the working of the Udupi Mathas. It is a book worth reading for experts and laymen alike.