Women Through the Cinematic Eye! 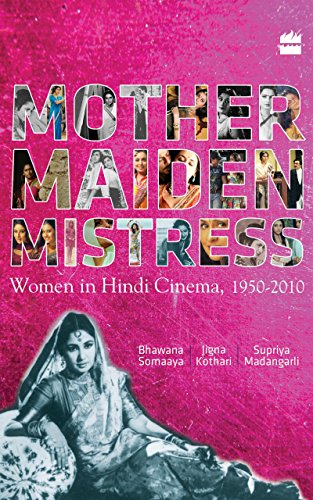 Mother Maiden Mistress is an attempt to map women’s representation in cinema from 1950-2010. The contribution of women in the Indian film industry has received minimal attention. This is a much needed addition to the historical narrative of Indian cinema. The book is premised on the argument that no matter how the decades have moved on, the basic definition of a woman-as mother, wife, sister, daughter, daughter-in-law, mistress, seductress and so on have remained the prisms through which women have been looked at. But the ‘soul’ of the character remained integral, emerging from the women in the epics like Sita, Draupadi, Savitri, Shakuntala, Radha, Meera and Surpanakha. The ever changing yet somehow static role of the Indian woman in Hindi cinema has been based on these stereotypes embedded in mythology, patriarchy and popular culture.

At the turn of the twentieth century, cinema had its humble beginnings in tents and theatre houses, where films were exhibited with an array of entertainment routines. The moving spectres of light caught the imagination of the people, producing fascination, awe and discomfort. The first full-length motion picture Raja Harishchandra was produced by Dadasaheb Phalke in 1913. Phalke struggled to get any woman to agree to act in the film. In the end, he had to cast a delicate-looking man called Salunke to play the role of Queen Taramati, the wife of Harishchandra. Before joining films, Salunke worked in a restaurant as a cook. He would later play the role of both Rama and Sita in Phalke’s 1917 film Lanka Dahan and become the most popular female impersonator of his time. It was in 1914 that Phalke finally found two women-Kamalabai Gokhale and her mother Durgabai to play the female parts in Mohini Bhasmasur. This was a first in the history of Indian cinema. However, for cinema to rid itself of its disreputable attachments and be acceptable was a long drawn process.