Cinema of the Eighties 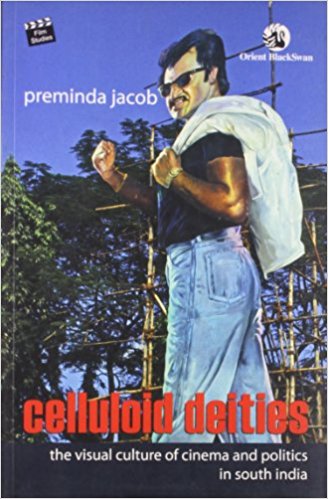 The city of Chennai was remembered until the early 2000s for its huge banners lining most of the arterial roads. Huge hand painted film hoardings battled for prominence with equally massive ads for consumer products. And then suddenly the denizens of Chennai felt that these hoardings were not really aesthetic and were also a great source of distraction for motorists. The rise in road accidents was placed especially on the cinema banners and not on poor road traffic management or the sudden increase in car sales. The colossal film hoardings were the city’s ‘Satans’ and had to be exorcised immediately. The wrath was so strong that they actually disappeared in a jiffy although accidents and fatalities kept increasing exponentially on the Chennai roads. Preminda Jacob chooses to call these hoardings ‘Celluloid Deities’ and the book has all the ingredients to inspire a young doctoral student in the USA to commence work on another thesis about Indian cinema. There is no doubt that this book is written almost exclusively for the South Asian Studies departments sprinkled over a variety of colleges in North America with a perfect combination of quotes from the venerable Roland Barthes and conver-sations with the subaltern painters in the painting studios of Chennai.

The book talks about a time which is dead and gone; the cinema of the late 80s which survives only as music video clips and FM radio songs; and with opinions of Indian film studies scholars who are completely removed from the harsh realities of film production in India and poster painters. In her attempt to cover as many aspects of Indian film studies Ms Jacobs briefly touches upon melodrama, Dravidian Politics, Fan clubs, studio systems, the economics of production and exhibition centers etc. I wonder if it was necessary at all.