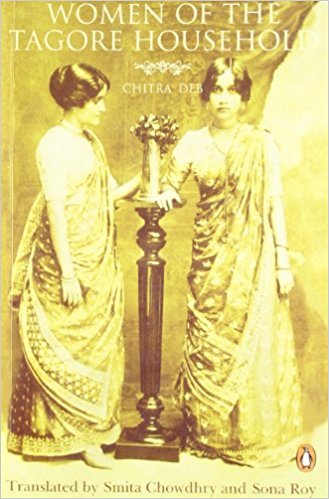 A remarkable compendium of fascinat-ing tales, Chitra Deb’s book is an unselfconsciously written account of generations of women in Bengal’s most significant family. The name ‘Tagore’ is synonymous with creativity in art, literature and music, but also stands for bold innovations in social thought. Clearly Dwarakanath Tagore or Rabindranath Tagore could not have achieved their spectacular success without the support of family and friends, but history has so far recorded far more about the men in the extended family than the women. Dwaraka-nath’s wealth, Debendranath’s philosophical musings, Abanindranath’s experiments in literature and art, Gaganendranath’s paintings are celebrated. However, a comprehensive story of the antarmahal of the women, which gradually opened up to embrace the world, waited to be revealed by a devoted researcher, Chitra Deb.

The book was published originally in Bengali in 1980, and the translated version has appeared recently to satisfy the curiosity of English knowing readers. Deb pulls out several bundles of motley fragments from the family closet, some of them stitched into fuller accounts of whispered tales and others that offer a serious appraisal of the women’s contribution to a reformist Bengal.

The leitmotif of this sprawling narrative appears to be the Tagore family’s desire to combine western modernity with Indian values. Indira Debi said as much: ‘The women of today have to blend their courage with the patience and fortitude of the older generation. Alternatively, today’s intelligence has to be combined with the grace and gentleness of the older times’ (p. 139). There are telling accounts of how Jnanadanandini, Rabindranath’s second sister-in-law proved to be an able innovator. Her husband, Satyendranath, was among the first civil service officers from India, and he recognized during his administrative training period in England that women in his own household in Calcutta were dreadfully constrained by their living conditions. In turn, he convinced Jnanadanandini that she could lead the women into a better quality of life. She began by designing appropriate clothes for herself so she could travel and socialize among English people. She tried a long dress and shoes but felt incongruous and uncomfortable. Later, emulating the Parsi women in Bombay, Jnanadanandini devised the modern drape of the sari, which came with its accompaniment of a stitched blouse and a petticoat, and smart jackets made of brocade. Jnanadanandini also influenced change in interior decor and cooking, and may be given the credit for evolving a nuclear family structure that kept its vital links with the primary Hindu household.