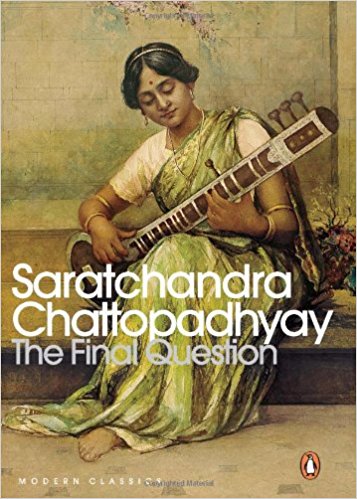 Translating Saratchandra Chattopadhyay is no easy task: his novels are so deeply embedded in the social and cultural atmosphere of his time, and the events and emotions he describes are so inextricably bound up with the energies, ideas and interrogations that shaped contemporary experiences that it is hard to come up with adequate expressive equivalents in a target language, especially if it is an European one. The task becomes more difficult if it is a novel of the class of Shesh Proshno (The Final Question), which is not only a marked departure from the realist-sentimentalist narrative that made Chattopadhyay the most popular Bengali novelist of his time, but is also a deliberate attempt on his part to come up with a modernist fiction that focuses on the minds of the characters rather than on their surroundings, and offers, in his own words, ‘nourishing food for the intellect’ (Letter to Bhupendrakishore Rakhshit, 4 Jaistha, 1338 Bangla year, Sharatshahitya Sangraha, Kolkata, Vol 10: 380–89). The ‘intellectual’ content of the novel comprises a series of dialogic deliberations on women, society, history, religion, progress, nation and nationalism as well as on the institution of marriage and brahmacharya (celibacy for an exalted ideal).

At the centre of the novel’s discursive frame is Kamal, a young, liberated woman of mixed English and Bengali parentage. A sharp-witted iconoclast, Kamal is adept in demolishing male discourses on women, widowhood, love and religion, among others, with incisive and often irrefutable logic.