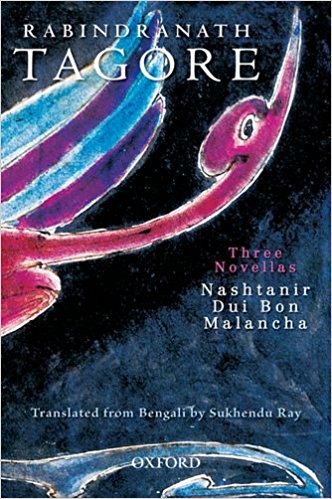 All the three novels that are grouped together in this collection, one of them separated from the others by more than 30 years, explore situations of extra-marital rapport that have the potential to become full-blown affairs. In the earliest of them (Nashtaneer that was later filmed by Satyajit Ray as Charulata), it is the woman who oversteps the lakshmanrekha of conjugal relationships. In the later works, the husband unwittingly exploits his wife’s terminal ailment to get closer to a sister-in-law/ distant relative than the norms of marriage would permit. In all three, therefore, the ‘illicit’ love is between two people who are either related by marriage or branch out from the same extended family. The women in all three are childless as in much of Tagore’s other fiction—Bimala in Ghare Baire, Mrinal in ‘Strir Patra,’ and Asha in Chokher Bali among others.

Strangely enough, Tagore chose to portray many of his married couples as childless in an age when childnessness was far from common because it was not practised as a matter of choice. Not having children, in his fiction, seems to be a precondition or a propitious context for either of the marital partners looking for fulfillment by overstepping the threshold of connubiality. Further, all three novels are about men who belong to the leisured class. Although not having to work for a living, Bhupati, in Nashtaneer, chooses to work, Sasanka, in Dui bon, retains a sense of vocation despite marrying the daughter of an affluent family, and Aditya, in Malancha, has a full-time passion that only an aristocrat can afford to invest in. Despite interlocking references to the incipient upsurge of nationalism and the Civil Disobedience movement in the others, Dui Bon elides the Swadeshi question altogether and is located in an elite, educated, technologically advanced setting, in which motor cars have replaced horse-drawn carriages, and a woman not only plays tennis in her spare time but visualizes going to England to study medicine.