Women, Communalism and the Shiv Sena 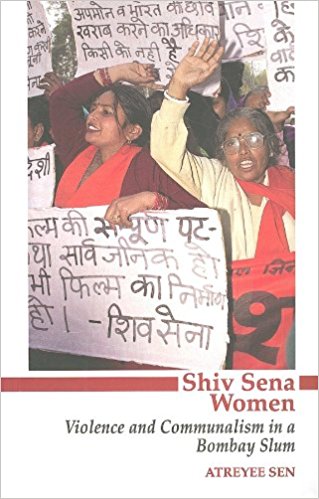 This is a book about poor urban slum women and children using collective violence to contest their vulnerabilities. The author has attempted covert ethnographic research among Shiv Sena women belonging to the Mahila Aghadi, frequenting Sena women’s homes, ‘shakhas’ and meetings in temple premises. Sen has laboriously tried to engage with the worldview of urban underprivileged alienated women who attempt to counter gender constraints and show signs of ‘empowerment’ in the process. While tracing this ‘heroism’ of the Sena women, the author claims to privilege ‘how Sena women construct their own unique history’ and analyses the reasons for the collective violence that they plan, organize and orchestrate. The book reviews feminist studies on the Hindu Right in India, and notably that of Paola Bachhetta, and seeks to move beyond an essentialist view of femininity. Sen highlights the subjectivity of Sena women when interpreting their violent actions.

Unlike Bachhetta, she goes beyond textual sources, and hence her efforts at chronicling militant women’s political and cultural life should be applauded; this is one of the first works that has analysed from within the active participation of Shiv Sena women in communalism.

It is an ethnography of the lowest rank of the Sena’s cadre, giving details of everyday slum life, their struggles for survival, as well as dramatic events such as riots. She covers two generations of Shiv Sena women, making available interesting points of comparison.

Sen argues that feminist concepts like agency and empowerment are applicable in this instance too, despite the fact that feminists have treated right wing women as passive recipients of rightist ideology and thus keeping them at the periphery of scholarly works. It is true that feminist and left oriented scholars and activists have expressed shock or anguish about Sena women’s participation in riots and other forms of violent actions. That shock occurs against the backdrop of an optimism that a reformist legacy—a brahmanical and counter-brahmanical one during the colonial period, a progressive women’s movement from the early 1980s and the burgeoning of an autonomous women’s movement since the mid 1980s—would lead to the creation of an ‘emancipatory’ feminist space in the particular context of Maharashtra. One feminist reaction to right wing women’s violence was therefore to lament the failure of progressive activists to reach beyond upper class, upper caste, urban women, while another was of utter shock at ‘savarna women participating in fundamentalist brutalities’. Sen does not engage with either of these reactions. Instead she extends Bachehtta’s argument that Sena women are ideologues themselves as they redefine their role in everyday life and in conflict situations. She justifies their participation in riots as ‘just violence’—a subaltern strategy of survival, but without mapping or problematizing the framework of ‘benevolent patriarchy’ within the caste system. Interestingly her work does not question the discourse of ‘empowerment of women’ coined in recent decades, which is mostly uncritically used in academic and policy circles and by most feminist scholars and activists.

One of the key shortcomings of this book is that Sena women’s militancy is seen sans the defining context of the changing economy in the post-liberalization era, the vertical networks of sharing haftas and extortion money, protection to illegal activities and links with criminalized politics and the land mafia within the Shiv Sena; and the definitive elements of Shiv Sena’s political and ideological positions including how ‘Marathi asmita’ (identity of Marathi speaking community) is prescribed—for and by the Sena cadre—whether as a static category or as one dynamically redefined over time. Additionally, the ways in which the mutation and emasculation of democratic institutions and the resultant crisis of faith led to the expansion of the Sena (failure to provide food security to the urban poor, for example, or the politics of slum demolition, rehabilitation and relocation) and the everchanging formations of collective subjectivities are not discussed at all.

This research also overlooks two areas of contemporary debate—one, the internal hierarchies within ‘communities’ thereby problematizing identity oriented organizations and the second is the entirely new ever-expanding trajectory of social history of Maharashtra in terms of dalit-bahujan uprisings, the non-brahmin movement and the multiple nationalist discourses (neglected till now). Due to this gap, Sen misses the opportunity of relating the subaltern voice of the Sena women with the discourse developed by Prabodhankar Thakare—father of the Sena supremo, who was an advocate of one such nationalist, reformist discourse in Maharashtra. In other words, a critical historical analysis of the various strands of nationalist discourses—ranging from the brahmanical to the radical dalit discourse might have helped to locate the Shiv Sena arguments on nation, women’s power and the ‘other’. Such an approach could have shed more light on the intercaste relations within the slum and among Sena women.

The book has seven chapters. The introduction states the objectives of research, fieldwork details and describes the methodology. It starts with a brief history of the Shiv Sena Mahila Aghadi and places it broadly within the context of a particular slum Nirmal Nagar in Chaturvadi, Mumbai. The second chapter deals with ‘urban alienation and the birth of women’s gangs’. The narratives of older Shiv Sena women cadre and the overall context of their induction in the Sena come as a very good example of participatory ethnography. The third chapter focuses on the Mumbai riots and women’s agency in violence, with an analysis of Sena women behind the riot scenes and at the fore. It explains the direct and indirect ways in which women played the role of instigators, protectors, and those who made up the support system for the rioters. ‘Mobilisation and organization’ is the title of the fourth chapter that looks at the patterns of mobilization, recruitment, and initiation into violent activities to safeguard space and identity in various ways. Aghadi women’s activities went much beyond what Sena Supremo expected and eventually other leaders had to grant them legitimacy as the Aghadi women proved their usefulness for the organization during the riots. The author’s keen interest in assessing the impact of Aghadi women’s participation in violence beyond the obvious is evident in her treatment of ‘Sena Boys and “Survival”’.

On the whole, the book makes a disappointing number of mistakes in translating Marathi texts, (for instance, Thakare’s weekly mouthpiece Marmik—meaning apt, insightful, penetrating, is described as a cartoon journal and translated as morality!), conversations and expressions. Even more serious are misrepresentations regarding historical ‘facts’, discourses and ‘narratives’ on Maratha history, which could have been corrected with some commitment to accuracy. Many passing remarks about Maharashtra’s cultural and political history could have been placed in the regional cultural context had she given due importance to the social milieu by consulting social scientists and public intellectuals in Maharashtra and/or on Maharashtra to understand the Aghadi women better. This tendency to take regional histories (except perhaps those of Bengal) casually, with reliance on use of ‘standard’ historical sources, unfortunately marks academic research conducted in ‘the international intellectual metropolis’ on social, intellectual and probably supposed ‘parochial intellectual periphery’ like Maharashtra. Had Sen been sensitive to the treasure of literature in Marathi commenting on the expansion of the Sena during the period under study or had consulted Marathi newspapers, magazines and other sources offering a range of discourses on the issue under scrutiny, this ethnography might have been more nuanced.