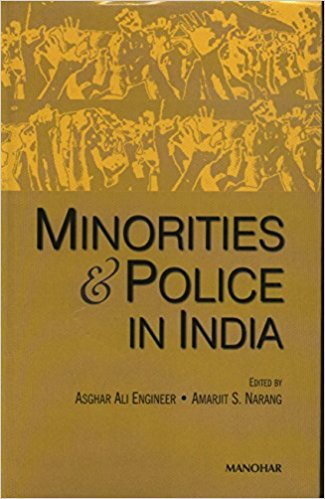 This volume is a collection of seminar papers written by academics and police officers. Like all seminar papers, they are informative, at times insightful and repetitive. How original can a dozen speakers be, dealing with the same subject? Here they tend to be prolix as well. Not many chairpersons have succeeded in putting limits to academic verbosity on the podium. At the very outset let it be said that the police has played a very partisan role in quite a few sectarian riots in the country. If we look at the 1984 anti-Sikh riots in Delhi, the 1992-93 Bombay riots in the long-drawn aftermath of the Babri Masjid demolition, and the post- Godhra riots in Gujarat, just to name a few, the police need to feel ashamed. There have been sundry riots in Meerut and Muzaffar-nagar too where the PAC (Pradeshik Armed Constabulary) of Uttar Pradesh played a decisively homicidal role. They shot Muslims and threw them in a canal (May 1987).

Let us take the larger picture first. How much of this police antipathy towards Sikhs (after the assassination of Mrs. Gandhi) and towards Muslims in general is due to political activism (1984 Delhi) and indoctrination? How much of it is due to militancy, terrorism and secessionism? The issue of minorities has to be viewed in a particular framework and we need to tackle the devil’s advocate first, as also some of his questions. We have two states where the minorities are in a majority. So firstly, have secessionist trends been noticed in J & K and Punjab? The cry for Khalistan (even if it was a historic aberration) and the slogan ‘Kashmir banega Pakistan’ are familiar to us, we are reminded by the two-horned guy. Secondly, did the Hindus suffer in these states—Kashmiri Pundits et al? Can one think of a Hindu chief minister in Kashmir or Punjab? Thirdly, are the minorities less sectarian than the Hindus? Fourthly, did some sections of these minorities take to terrorism in the near past? Lastly have these militants/ terrorists killed policemen in tens or in hundreds? Someone in this seminar of verbal largesse could have tried to answer these Mephistophelian queries, I thought. This reviewer certainly ain’t gonna attempt it.

The extreme right wing Hindutva brigades have been making capital of these very issues. They have reminded the Hindu that he has been in subjection for a thousand years and must assert himself now. Cheap symbolism adds fuel to fire—Bharat Mata being sliced in two. Parties like the Shiv Sena have targeted various sections (south Indians, later Muslims and now people from UP and Bihar) with sticks and stones, and during the worst riots, with the unmatched gasoline-and-match ‘jugalbandi’. It is people at the mental, economic, and social level of the constabulary who lap up this kind of propaganda, and accept such pseudo-historic grouses thrust down their willing throats. The question arises, what is the officer cadre doing? Where is their leadership?

The political class think that minorityism is a sweet little game where the winners (read Congress, SP and BSP) win the elections. Today the Communists tell a party leader that Muslims will be upset if he supports the Indo-US nuclear deal. Could anything be crasser? Hence politics sows, fertilizes and reaps the sectarian harvest. How does one isolate the police from this atmosphere? To quote a Pakistani poet

Asghar Ali Engineer has visited most riot-torn cities—from Ahmedabad and Bhiwandi to Nellie, Meerut and Bihar Sharif. He lists false rumours and news items he came across—an alleged transmitter in a mosque (when he and Subhadra Joshi, who rushed there, didn’t find even a transistor) and allegations of rapes by Muslims which had never occurred. He also lists officers like Satish Sahney, Bombay Police Commissioner, Powar, Madhukar Zende and Sanjay Pande who behaved impeccably in the 1992-93 Bombay riots. He blames the teaching of medieval history—highlighting the deeds of Mahmud Ghaznavi and later Aurangzeb. ‘The entire history of India veers around these villains,’ are his comments on right wing propaganda. He correctly suggests that the police force must be reflective of the diversity of our society. Most other authors in the book say the same. We need more Muslims in the police all over the country.

Other authors like Kripal Singh Dhillon have made the point that after partition the police force was suddenly bereft of the Muslim component which had migrated to Pakistan. Not only that, in UP for instance, it is within this reviewer’s knowledge that there was a secret government circular during Gobind Ballabh Pant’s time which advised lesser recruitment from the Muslim community into the police.

Co-editor Amarjit S. Narang has summarized in essence each contribution. Actually the book is a diatribe (mostly well deserved) against police bias and brutality during sectarian riots. At times, however, the writers go overboard. For instance Narang says, ‘the mosque in Ayodhya was demolished in full view of tens of thousands of policemen…’ But Narang would know this is only a half truth. The police were restrained by the UP government (and the magistracy) from acting against the vandals. Similarly when Engineer says that only five per cent of Muslims were in favour of Pakistan, the statement could be contested.

Most papers make the same point, blaming the colonialist Police Act of 1861, and then blame the government for not implementing the recommendations of the National Police Commission under Dharam Vira. This reviewer may add here that a fellow officer, N.S. Saksena, was a member of the commission. Mrs. Gandhi, after coming back to power in 1980, appointed yet another police officer D. Sen to dismantle the recommendations! The Janata government should not get the credit for reform! Vibhuti Narain Rai, a fine police officer from UP and Harsh Mander, an IAS officer from Madhya Pradesh, get quoted most often in the book. Apart from saying that the police is partial and discriminatory in the use of force and preventive arrests, and that Hindus and Muslims have differing perceptions, Rai says that the expectations of the Indian society from average policemen are communal. The policeman is believed to be a protector of his community. (Incidentally, caste expectations are similar. You are supposed to help your ‘jat’ and ‘biradari’, right or wrong.) K.S. Subramaniam quotes from numerous enquiry commissions that reveal the police’s biased role in riots. Both he and Narang talk about the post-1861 Police as a ‘centralized paramilitary force.’ This beats me. The civil police was always a rag-tag outfit with a handful of .410 muskets even in the nineteen eighties.

Abdurahim Vijapur and Mohammad Mohibul Haque make the point that ‘it is a very dangerous situation where the police, armed to the teeth with legal measures, turns on the same society which had created it for the protection of its life, rights and properties.’ They quote correctly TADA figures. In a total of 26,915 people detained country-wide under TADA between 1988-91, Gujarat led with 9,569. The authors contend that it was the Muslims and the tribals who mainly bore the brunt. (Actually, Gujarat Police went overboard and even bootleggers and hooligans were booked under TADA.) They also quote figures for 28th February, 2002 when the Gujarat riots broke out. The Police shot 40 people, of whom 36 were Muslims, when murder and arson were being committed by Hindus. Arshi Khan’s is the most revealing paper in the book. He refers to the anti-Muslim languge used by the police, also points that the Police nullifies with its enormous powers what the Constitution gives to the minorities, and intends that Muslims arrested in Godhra were denied bail while ‘thousands of murderers in the Gujarat genocide’ are roam freely. He has talked of the ‘majoritarian character of the Indian democracy’ where ‘Muslims are least represented in various structures of power.’ He also refers to the large numbers of acquittals in Gujarat and Bhagalpur.

There are interesting papers from Chaman Lal and Raghavan. But from police officers one would expect pointed analysis. For instance, were other para-military forces like the Central Reserve Police, who were deployed during riots, as partial as detailed examination of partial registration of cases, and investigation show that Muslims find it difficult to record an FIR in Gujarat. How many cases, for instance, in the Gujarat riot were registered against Hindus and Muslims, what is the ratio of charge-sheets issued? Instead what we get from K. S. Dhillon and K.S. Subramanian are desultory histories of police administration.

Lastly, protecting and ensuring the human rights of all individuals should be a primary duty of the police. This bit needs to be inserted in the oath policemen take. It is absolutely unacceptable that a large minority lives mentally under siege. Muslims are welcome in a walled city, but not a walled city created in the mind.