No Alternatives to Democracy 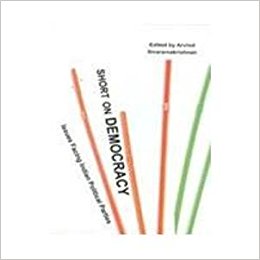 Probably few other concepts occupy, if not hegemonize, political imagination as democracy does. ‘What began as an improvised remedy for a very local Greek difficulty two and a half thousand years ago, flourished briefly but scintillatingly, and then faded away almost everywhere for all but two thousand years’ as political theorist John Dunn writes in his masterly monograph (Democracy: A History. Altantic Monthly Press, New York, 2005), ‘has for the first time in the history of our still conspicuously multilingual species acquired an over-riding acceptance as the legitimate basis of political authority. Not, of course, uncontested in practice anywhere, and still roundly rejected in many quarters, but never, any longer, in favour of an alternative secular claimant to cosmopolitan legitimacy.’ To state more emphatically, for the first time in history, we have the existence of a single cosmopolitan standard, as also the term selected to express it.

Democracy is both a form of government and a political value. We often quarrel fiercely, if confusedly, over how far the value vindicates or indicts our own practices of governance. But we also quarrel over how far the same value is practically coherent, or desirable, in its prospective consequences in different circumstances, on any scale between an individual family or domestic unit and the entire human population of a still painfully disunited globe. When we use the term democracy today, we mean far more than the school-text definition of ‘a government of the people, by the people, and for the people’. Thus when we speak or think of ourselves as living in a democracy, we have in mind that our own state, and the government which does so much to organize our lives, draws its legitimacy from us, and that we have a reasonable chance of being able to compel it to continue to do so. This legitimacy, we believe, comes from holding regular elections in which every adult citizen can vote freely and without fear, in which each vote has a reasonably equal weight, and in which any uncriminalized political opinion can compete freely for votes, legitimacy, and eventually the power and authority to shape our lives. This, at least, is the theory, and the governing myth.

Reality, as we know all too well, is somewhat different. Despite every country claiming adherence to the same/similar values and standards of judgement, their systems of organizing political authority are different, often dramatically so. What, however, is common to all democracies is a system of elections to choose representatives. And this—from selection of candidates to the mobilization of people, articulation and aggregation of interests to passing of legislation and holding the government accountable—is carried out through political parties. In a nutshell, therefore, the wellbeing of democracy depends a great deal on the structure and functioning of political parties. The set of essays put together by Arvind Sivaramakrishanan—ten in all—reflect on the working of different political parties in the Indian context to help us understand the health of our democracy.

Before commenting on the different contributions to the volume, it is important to place on record, a crucial paradox involving parties, elections and democracy. As a recent survey on the state of democracy in South Asia (OUP, 2007) points out, the idea of democracy has acquired deep roots in our region. Of all possible forms of rule, people prefer democracy, and that too multi-party electoral democracy, to rule either by the army, hereditary rulers or by religious leaders. And yet, almost invariably, both politicians and political parties enjoy extremely low levels of trust. Anyone watching the shenanigans in the recent special session of the Indian Parliament to debate the trust motion brought in by the government could not but have been dismayed by the behaviour of our political class across party lines. The greater tragedy is that the key actors—politicians and parties—seem singularly unconcerned about how the common citizen views them and their actions. An yet, it is equally true that efforts to derail democracy and replace it by another system have in every country been resisted. Also that these struggles have in the main been spearheaded by the political parties. This can be seen not just in the struggle against the Emergency regime in India but in the movements for the restoration of democracy in Pakistan, in the anti-monarchial movements in Nepal and so on. It is also apparent that other forms of rule—say by the army—whatever their perceived short-run benefits, in the form of greater order have proved incapable of governing and holding the country together.

The conventional understanding of political parties in our country—that they lack both structure and internal democracy, have no clear ideology, rarely address the concerns of the majority of the people, are more concerned at targeting patronage than discussing and framing policy—in short, they are dysfunctional, is echoed in every essay of the book. What, however, is left unaddressed is the question why parties continue to be so popular and vital. Or why, despite all their weaknesses and unlike in many other parts of the world, political parties (in India, and the region) continue to remain the principal force around which public contestations are organized, serving to structure political alternatives for the people, formulating policies and translating them into popularly intelligible choices.

It is often inadequately realized however, that the nature of party political system, and therefore of political parties, has been anything but stable. The early post-independence decades of a few big (national) parties has metamorphosed into a proliferation and multiplicity of parties—regional, ethnic, personality based—reflective of the fragmentation in our polity and society. While at one level this has meant an era of unstable coalitions, thereby making governance difficult, it may paradoxically have helped expand the reach of political parties, often by bringing new segments of society into the electoral, democratic framework. While undoubtedly making the task of democratic consolidation difficult the process of proliferation does not reflect political apathy; instead it may well express the expanding base of electoral democracy. It is important to underscore that unlike in many other parts of the world, our voter turnout figures continue to be robust. It is likely that the decline of one party dominance and its replacement by a multiplicity of regional and ethnic parties is a truer reflection of our spatial and social diversities, and thus may constitute a better base for im-proving the quality of our electoral democracy.

Unfortunately, the book under review, despite fascinating essays on a range of parties—the Congress, BJP, Samajwadi Party, the Bahujan Samaj Party and the Dravidian parties—fails to adequately engage with these larger questions about the changing nature of political parties, electoral systems, and democracy. Nor do we, unfortunately, get a sound empirical sense of issues like recruitment of cadres, processes of candidate selection, campaigning, party finances, policy formulation, and so on. Surprising, since some of these questions—both about the party system and individual parties—have been the subject matter of earlier books, be it the classic study of the Congress party system by Rajni Kothari in the 1960s, the book on Jan Sangh by Bruce Graham or even the more recent monograph on dalit and backward caste politics by Christophe Jaffrelot.

True, we do learn (though this does not come as a surprise) that our political parties have essentially become election and patronage machines, that democratic principles rarely inform the internal functioning of parties, and that most parties, whatever their formal protestations, have become captive to a small cabal of people, what is euphemistically called the ‘high command syndrome’. One does wonder had the book also included an assessment of the Left parties, whether its overall tone would have changed. For, whatever our unease with the ideological proclivities of the Left, it can hardly be claimed that they lack an organizational structure, that they are dominated by a few individuals or families, or that they do not take their politics seriously, reducing it primarily to elections.

Overall then, this volume, while being a useful addition to the literature on Indian political parties and our electoral democracy, insufficiently engages with some of the deeper questions about the evolution of our democratic experience. It is, for instance, intriguing why none of the contributors, despite the presence of a few journalists, have bothered to look at the role of the media—in particular television—in shaping the behaviour and character of political parties. Nor is there any useful discussion of the role of corporates or organized criminality in influencing the strategic choices of political parties. They have also failed to engage with the important question of political parties in governance, in particular the tensions inherent in crafting viable strategies for winning elections and ruling. Above all, it appears that our political analysts remain unduly influenced by an idealized perception of what political parties ought to be, drawing on, one suspects, their reading of western political experience in the second half of the last century. No wonder we still have to get an understanding of the specificities of Indian democracy and thus the concrete evolution of our political parties. Continuing to assess them by abstract universalistic standards can only help entrench the common view of politicians and political parties as messy, if not an avoidable irritant.