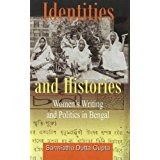 Identities and Histories is an insightful and passionate book about the emergence of women as political subjects. The book moves away from questions of nationalism, modernity and reform which framed earlier bodies of feminist history-writing in India. This earlier body of work had shown us how the nation and indeed the political itself were historically produced as deeply gendered formations, predicated upon the control and reconstitution of the women of the community under modern regimes of ‘new patriarchy’, culture, service and labour. While drawing upon the insights of this earlier historiography, Identities and Histories however insists that not enough attention has been paid as yet to the different ways in which women have politicized themselves in India. Of course, the active and autonomous participation of women in politics has by now been amply demonstrated. Yet that by itself is not enough.

As the author rightly points out, what we need are histories of the difficult and conflicted ‘passage’ into the political that mark the constitution of gendered political selves. In other words, the implicit premise of the book is that it is not enough to only say that women—and the domestic, interior, affective spaces of society—were always already political, only that they were refused to be acknowledged as such. The point is to demonstrate the ‘entry’ of gendered subjects into the political domain and account for the consequent redefinitions of the political as such.