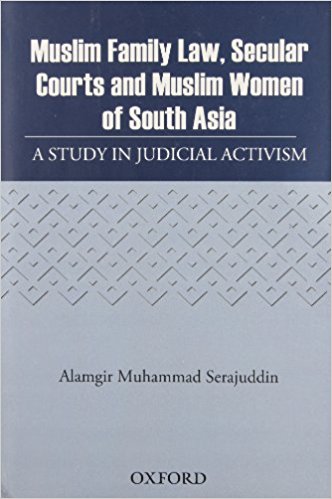 Alamgir Muhammad Serajuddin’s book provides a comprehensive idea of judicial activism that has taken place in south Asian regions especially India, Pakistan and Bangladesh in recent times. The methodological framework explains the concept of judicial activism and creativity and emphasizes the role of the courts as an agent of social change. The following chapters focuse on a) the rules of interpretation of Shariah law as laid down by the Privy Council, the application of the rules by the colonial courts before Independence and the introduction of the English common law doctrine all leading to fossilization of Muslim family law in South Asia; b) the initial hesitation and caution of the Indian courts, in the first two decades of Independence, to diverge from the course followed by the colonial courts, and their subsequent independent and activist stances, resulting in harmonizing of modern secular law and in a few cases, Muslim personal law; c) the role of the Pakistan courts with regard to the independent interpretation of the sources of Shariah law including the Quran and Sunnah in opposition to their sacrosanct and immutable interpretation and formulation by the classical jurists as well as the impact of Islamization of the laws programme of the eighties of the last century on the outlook of the courts; d) the judicial attempts to outlaw polygamy and maintenance of destitute divorced Muslim women and especially the protection of the rights of the Purdanasheen women in Bangladesh. In conclusion, the author observes that India, Pakistan and Bangladesh can share and benefit from each other’s experiences.