Whose Islam Was It? 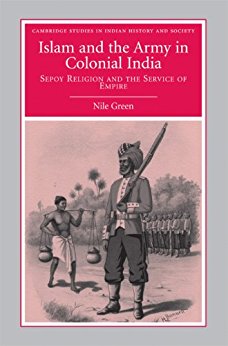 Whose Islam Was It?
Sabyasachi Dasgupta
ISLAM AND THE ARMY IN COLONIAL INDIA: SEPOY RELIGION IN THE SERVICE OF EMPIRE by Nile Green Cambridge University Press, 2010, 218 pp., 695
February 2010, volume 36, No 2

Fakirs with their puppet shows exhibit military conflicts which end with the flight of the English. Songs resound the praises of our enemies and reports are industriously spread to rouse thenative troops and inferior classes of inhabitants in action . . . The very salt we manufacture is said to be mixed with the blood of cows or swine, Hindus and the Musulmans’.

The fakir for the British in India represented everything that was subversive: he was an object of dread, he symbolized all that the British were unable to comprehend and control, and he was therefore to be feared. Conversely he was also looked upon with admiration and awe, for he was someone who operated outside the colonial paradigm, a being seemingly beyond the hegemonic potential of the Raj.

Nile Green’s work by closely focusing on the vernacular biographies of certain fakirs studies the complex ways in which European commanding officers, sepoys and faqirs interacted in the Hyderabad contingent in the crucial period stretching from the mid-nineteenth century to the early decades of the 20th century to mould a barrack version of Islam marked for its heavy stress on miracles, a general abundance of colour and gaiety, all of which provided a psychological succour to the sepoy and held out at the same time the prospect of an alternate worldview. While such contrary worldviews could be read as a subaltern resistance to the colonial order, Green cautions against interpreting resistance too literally. Such versions would inevitably face a stern challenge from the army’s increasing stress on literacy, which would in its wake usher in more orthodox, bookish and puritan versions of Islam shorn of gaiety and colour. This would be exacerbated by religious and political trends in the subcontinent, phenomena that are outside the scope of this study.