Whose India is it Anyway? 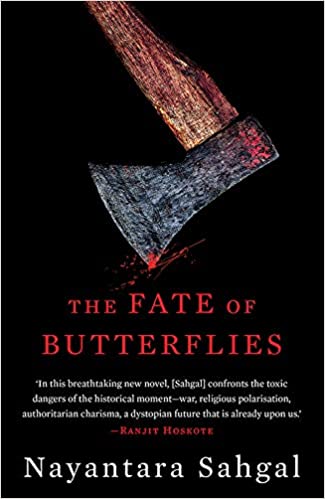 The Fate of Butterflies by the redoubtable Nayantara Sahgal is another testimonial to the author’s versatile imagination. Interweaving the personal and the political like many of Sahgal’s earlier novels, the novel narrates a history of the present from a fast receding liberal-secular perspective.

The Fate of Butterflies traces the story of several people but centres mainly around Prabhakar, a Professor of Political Science who has risen from destitution to being a respected author, caught up in the maelstrom of contemporary history, to Sergei, the Russian arms dealer who has given up the idea of writing a book narrating the story of trade, to concentrate on his father’s arms business and who has shed his Russian inheritance and identity and assumed one of cosmopolitanism. It also depicts, inter alia, Francois and Prahalad, the gay couple who own and run Bonjour, a fine dining restaurant and breakfast-place and very quickly the novel establishes a cosmopolitan identity as the composite or definitive Indian identity. It is this identity that is at stake in a majoritarian  India, where pluralities are suppressed to present a singular, monolithic identity based solely on religion. At the heart of the narrative is also the story of Katerina, who, along with some rural women, is brutalized, gangraped and left to die. The novel also tells the impact of polarization on Rafeeq and Rahman, the intrepid chef and the owner of Kaif—who suddenly find that they are strangers in a country they had previously called their own.