Who Will Cast the First Stone 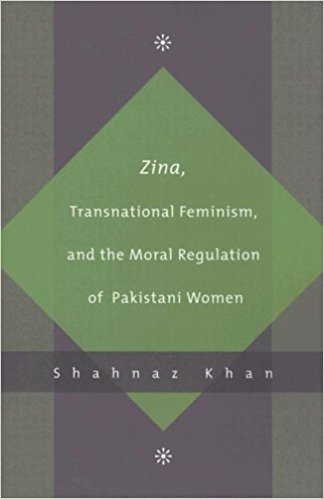 Who Will Cast the First Stone
Shohini Ghosh
ZINA: TRANSNATIONAL FEMINISM AND THE MORAL REGULATION OF WOMEN IN PAKISTAN by Shahnaz Khan Oxford University Press, 2007, 152 pp., 25
October 2007, volume 31, No 10

Your fear Of my being free, being alive, and able to think might lead you, who knows, into what travails. Kishwar Neheed (Feminist Poet from Paksitan) The imposition of the Zina Ordinances and the subsequent resistance to it by the Pakistan Women’s movement has been a significant moment in the history of Feminisms in South Asia. The Zina ordinances were promulgated during the military regime of General Zia-ul-Haque who had seized power from Prime Minister Zulfikar Ali Bhutto in a military coup in July 1977. Within two years of Zia seizing power, Bhutto would be hanged, elections cancelled and all political activity banned. Attributing Pakistan’s problems to an ‘un-Islamic way of life’, Zia launched Nizam-e-Mustafa (Governance inspired by the prophet) that took the form of a purification drive seeking to eliminate impure and undesirable elements through imprisonment or execution.