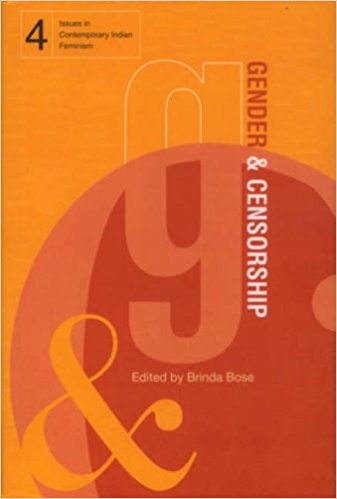 This is the fourth in the series by Women Unlimited on ‘Issues in Contemporary Indian Feminism’. Each volume so far, other than providing a range of excellent writing on key issues, has tried to explode the myth of a singular feminist position on an issue by bringing out the nuances of divergent positions within the women’s movement. In this comprehensive hold-all, Brinda Bose (whose last edited volume Translating Desire was a beautifully produced set of essays on the representation of female desire in popular culture) collects censorship-related memorabilia primarily from the 1980s and 90s and packages it chronologically to present us with a remarkable compendium. It is an exhaustive haul; from the odd thought-piece to legal reviews to statements by NGO-combines to theory to government policy papers, Bose just about covers everything. Across the fields of law, political science, women’s studies, activism and media studies, this is a truly interdisciplinary selection.

Brinda Bose begins her Introduction by looking at two important events in 2004 which according to her created the conditions for a reformulation of debates around censorship. The first is the fall of the Hindu Right wing government, following which artists and activists realized that the clamp-down on freedom of speech and expression had not ended, but only changed form. The second is the series of scandals, ‘MMS scandal’ in particular, that ignited a new set of anxieties about sex and new technologies. The changing mediascape in which censorship of film (the traditional purview of the Censor Board) is inadequate to cover the multitude of outlets available today, whether the DVD or TV or mobile platforms, prompts Bose to ask very pertinently if it is ‘not time… to reconceptualize the contours of the battle, and re-identify the antagonists as well as the arrangements?’

With that, Bose cuts to a flashback. The first section, on laws, structures and guidelines, begins with an extract from the Report of the Working Group on National Film Policy 1980. The chapter articulates the historical logic of censorship in the Indian state and throws light on the procedures and powers of the government in setting up a Censor Board, calling for an open, dynamic and liberal approach to censorship over time. If in theory it sounds ideal, Manjunath Pendakur then looks at the practice by examining the actual interpretation and implementation of censorship policies through examples such as films Bombay and Bandit queen. His verdict is that censorship is all about politics, exercise of arbitrary power by the state and is a muzzle for dissenting views. V.R. Krishna Iyer ruminates over the meaning of ‘obscenity’ in jurisprudence, showing the inherent problems in law with such subjective concepts.

The second section shifts from the legal terrain to the responses of feminists and the women’s movement to the representation of women in the media. Shahnaz Anklesaria pokes holes in the interpretation of ‘obscenity’ and raises the problematic of media’s representation of women on the whole. Vimal Balasubrahmanyam provides activist insights in her review of media monitoring by women’s groups, giving examples of campaigns against sexism in the media. Sonia Bathla probes the consensus between media and Indian culture that keeps actual issues of women’s problems (such as domestic violence or rape) out of the mainstream newspapers, reminding us that a free press in itself does not guarantee representation of concerns of marginalized groups. Akhila Sivadas discusses TV programming in the age of satellite media that presents to us a picture of Indian womanhood that is ‘an uneasy mix of social reality and a problematic construct’. Shohini Ghosh and Ratna Kapur critique a report by other women’s groups and National Commission for Women supportive of the state’s intent to make film censorship more stringent, questioning the link between onscreen sex/violence and its impact on the viewer. Two basic positions of women’s groups emerge—one tending to be pro-censorship in a specific way that sees excessive sex/violence in the media causing increased violence against women on the streets. The other refutes this cause-and-effect theory and believes in no form of censorship whatsoever.

In the third section based on the Indecent Representation of Women Act 1986 more disagreements amongst women’s groups surface. This Act was one that a section of women’s groups fought to institute amidst internal debate and opposition. Madhu Kishwar and Ruth Vanita point out how the Act will only be used as a pretext for repression. Indira Jaisingh illustrates this through the example of the Illustrated Weekly case in 1986, in which the Chief Minister of Orissa J.B. Patnaik called back an issue of the magazine citing the law for carrying a picture of a semi-nude woman. Coincidentally this very issue also carried an expose on him, which was the real reason for the confiscation of the magazine. Indira Jaisingh and Andrea Wolfe also look at the concept of ‘ignoble servility’ by examining legal debates around the film Pati Parmeshwar. Flavia Agnes uses the same two cases to highlight how individual judges interpret the law and contradict one another, to no service to womankind.

Also in this section is Monica Juneja analysing M.F. Husain’s portrayal of Saraswati and Draupadi, contextualizing it in the present historical moment of Hindutva and heightened communal tensions. Shohini Ghosh examines the hype around an incident of morphing of a photo of a film actress, stating that restriction of free speech on the internet is not the solution. Monika Mehta traces the landmark debate around the song ‘Choli ke peeche kya hai’ from the film Khalnayak while Meera Kosambi outlines the problems with the film Bandit Queen, raising ethical and legal concerns as well as some critical issues of privacy of living persons being represented on screen. Ashwini Sukthankar relives the organizing of lesbian feminists and their dialogue with other women’s groups during the controversy after the film Fire, while the statement from the Bharosa incident (in which staff members of the organization working on HIV/AIDS awareness were arrested under Section 377 of the IPC) reminds us that perceptions of deviant sexuality continues to be the core of much of censorship anxieties. All of these reflect the moral panic around sexuality, especially female sexual agency and its representation, that laces censorship.

In the last section on new directions for debates on censorship, Ratna Kapur reflects on the distinction between hate speech and sexual speech and the state’s problematic responses to these. M. Madhava Prasad sheds light on the state’s perception of public and private, pointing out that the unspoken ban on kissing is really a metaphor for censorship of public representation of the private. Shohini Ghosh calls for caution within feminist responses, attempting to find what distinguishes them from the right wing traditionalist positions. Tejaswini Niranjana looks at continuities and discontinuities in feminist film criticism over the decades, giving a fresh perspective on what future concerns should be. In an important contribution Ammu Joseph reports on a women writers’ conference, bringing out how women often censor themselves in the fear of the implications and fallout of hurting those they love, or their family. The section closes with a public debate from the Times of India on the archaic, meaningless acts of censorship executed by the Censor Board and calling for a liberal approach, and Rohit Gupta articulating the paradox of the right of pornography to exist.

Some of the drawbacks of the volume are that all the twenty-six pieces are previously published (some few times over in fact), that there is a repetition of writers and the inconsistent styles makes for difficult reading sometimes. There are also too few articles from this decade, so much of the issues that Bose teases us with in the beginning, such as that of new technologies, are not sufficiently explored or taken forward.

Evidently, religion and sex lie at the centre of most censorship huddles in India, implicating women in an inescapable grasp. Censorship as a concept is part of the sexual politics of the region played out on (the representation of) women’s bodies. The book covers the usual grounds such as, who can decide what is ‘obscene’, ‘vulgar’, or socially acceptable? Can artistic freedom be compromised for public good? What is public good? It also raises some new questions, especially in relation to women and sexual moralities. What makes this book special, though is something else. Sometimes it is only when a compilation like this comes along that one realizes how rich and consistent our engagement with the issue has been. By piecing together different parts of the puzzle, the bigger picture emerges. A large mural of public debate is unveiled before us.

Manjima Bhattacharjya works on women’s rights issues. She is based in Mumbai.