What the Empire Stood For 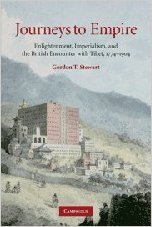 Gordon T. Stewart’s book is fascinating, for being English he has Stewart has had an advantage in easily accessing the old British agents’ diaries, letters and political dispatches. The book contains every feature of what the empire stood for: enlightenment, imperialism and interest. The book is interesting but repeats the same wistful narratives of British encounters with the Asiatic world that are reverberated in a plethora of books and literature churned out by various European authors over the years. Various writers had shown interest in the past on the early encounters of George Bogle (1746–81) and Francis Younghusband (1863–1942), on both of which Gordon Stewart’s analyses are based. But what Stewart has done is to provide the contrast between two exemplary features of both the Scottish Enlightenment and late British imperialism. His analysis is based on George Bogle’s connection with both Scottish Enlightenment and the empire. Essentially, the writer argues how historians and writers were deeply influenced by stereotyped western understanding of Asian peoples.

Stewart tries to use this approach in tackling the subject while interpreting various forces that conditioned the journeys of Bogle and Younghusband. Stewart’s detailed account on Bogle’s expedition is fascinating. Very little was known earlier about Bogle’s closed encounters with Lobzang Palden Yeshe, the Third Panchen Lama. But one wonders why the early British explorers failed to break the ice in Tibet, at least for their inability to tame the Tibetans culturally and politically as compared to enlightenment successes in similarly closed spatial entities elsewhere.