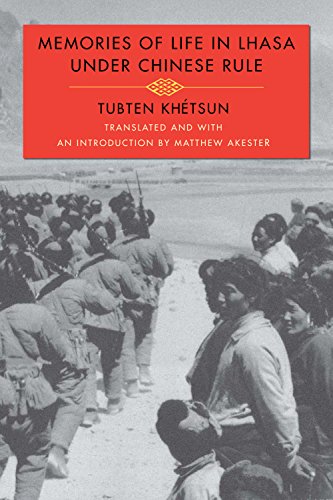 What is special about the autobiography of an ordinary man? Not much perhaps, except that it may well be an accurate
documentation of life on average. This element of the prosaic is precisely why Tubten Khetsun’s book is pertinent. Presenting the
views and circumstances of an ordinary Tibetan from the time of the Tibetan People’s Uprising in 1959 to the early 1980s, this book documents the changes wrought by expanding Chinese control over the region. This work forms part of only a few such documents authored by Tibetans for a Tibetan readership that have been translated into English. Hitherto, most writings on Tibet had been written by Tibetans in collaboration with western scholars who were largely familiar with their subject matter.

Such a testimony, penned by a Tibetan for his peers, with the purpose of documenting past events so that they may not be forgotten, is extremely rare. Written in simple language with a wealth of information regarding dates, names and places, the details provided in this book recreate an image of Tibetan life for the reader. While some facts reported in this book may be familiar to students of Chinese history and politics, a record of the Chinese state’s economic and social policies in Tibet in this period is certainly uncommon.

Tubten Khetsun was a member of upper class Tibetan society, some whose extended family occupied important positions in government. As a teenager he passed the entrance examinations for the palace secretariat and worked there first as a minor official copying documents and then as an ‘incense bearer’ for the Dalai Lama on ceremonial occasions. In March 1959 with rumours in Lhasa that the Dalai Lama would be detained and ultimately eliminated by the Chinese Army, the Tibetan people formed a defensive line around the Norbulingka, the summer palace. These fears over the safety of the spiritual leaders precipitated the clash between the Chinese forces and Tibetans. In the aftermath of the armed conflict, the Tibetan Guard was thoroughly routed and Tubten Khetsun sentenced to four years of ‘reform through labour’. A large part of this book details the life of the author in prison and the hardships of his life afterwards.