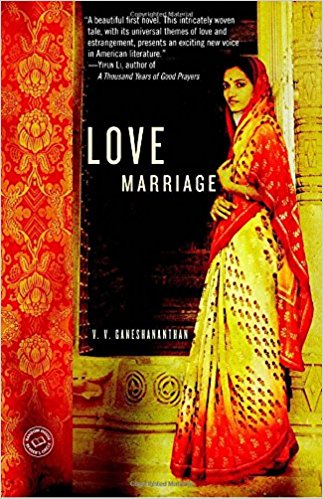 V.V. Ganeshananthan’s Love Marriage is a debut novel set against the circumstances of postcolonial Sri Lankan society, torn apart by ethnic conflict. I received my review copy at the time when the media was reporting on the ‘successful’ re-capture of Kilinochi by the Sri Lankan army from the hold of Tamil separatists, and the possibility of finally securing Prabhakaran, the elusive and enigmatic commander of the LTTE. Ganeshananthan’s evocative rendering of the lives of ordinary Sri Lankan Tamil speaking people caught in the vortex of a civil war, made me remember the plight of collegemates in Tamil Nadu, compelled into exile after the eruption of wide scale anti-Tamil riots in 1983. Families were separated, and dispersed across the globe to become participants in the larger Sri Lankan Tamil diaspora in countries like Canada, Australia and the United Kingdom.

The book’s female narrator Yalini is born in July 1983 in New England. The date coincides with the ‘Black July’ outbreak of riots on the streets of Colombo. Yalini reflects: ‘As I entered this new world, my parents’ old one was being destroyed. . . . I was born, and halfway around the world, Tamil people died, betrayed by their own country, which did nothing to save them’ (p. 18). The violence of 1983 would give impetus to the rise of Tamil separatist groups who would fight for a separate Tamil nation in the decades to come, the strongest of which would be the Liberation Tigers of Tamil Eelam (p. 19). Young people whose families suffered strengthened the ranks of the Tigers. To the world, ‘they would be called terrorists. They would enter a world in which no one was right’ (p. 19).

Yalini reconstructs her own diasporic being as the ‘result of many marriages’ of her now ‘globe-scattered’ paternal and maternal families: ‘The rule is that all families begin with a marriage. And the other way around . . . You cannot go unfettered into a family’s history if you are one of them’ (p. 3 ). The novel opens with a description of the ‘self-arranged marriage’ (p. 4) of her father Murali, a doctor with a heart condition who comes to the United States to work in a hospital in New England, and Vani, her mother, who is a teacher in New York. Integral to the narrative is Vani’s brother Kumaran who had violently opposed this ‘not proper marriage’ to the extent of threatening Murali’s family with dire consequences. This had led to an irreparable rift between brother and sister. Now, after decades of distance, Uncle Kumaran reunites with his sister and her family, not in the USA but in Canada which until recently was a safe refuge for the Tamils. Yalini has never met her uncle but has known of him from family lore as a fiercely loyal Tamil Tiger. He is in the last stages of cancer, and has travelled to Canada with his only daughter Janani. The Tigers, we are told, are famous for never letting anyone go. In return for allowing Kumaran his journey, they will extract the loyalty of his sister’s family.