Sannata: The Silence of a Small Town 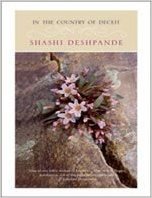 I made the mistake of reading other reviews of the novel before writing my own. At that time I had not read In the Country of Deceit, and did not know that I would be asked to write on it. Eventually when I did read the novel, it seemed different from the impression I had gathered from the reviews. No one had mentioned that a character in the novel dreams of making a film called Sannata, which would be about the silence of an entire town. This remains an understated and evasive motif in the book, a counterpoint to the love story. The film is never made of course, but the way the idea gets postponed, diluted, and eventually abandoned, echoes the movement of the main story. Deshpande introduces another minor strand in the novel—about a disputed piece of property—carrying a sense of foreboding, but instead of tying up everything neatly at the end, she deliberately leaves the narrative inconclusive, and does it with the confidence of a master story-teller.

A fictitious town Rajnur near the Karnataka-Maharashtra border not only provides the setting, but also the spirit of the novel. The narrator, Devayani Mudhol, is translating a history of Rajnur from Kannada into English at someone’s request and even though, the book is dull, she discovers nuggets of interesting information. For example, she finds that an official in Rajnur was a friend of Charles Darwin, who sent Darwin notes on the ‘animal life’ of the region. She also comes to know of the legend around each fort and shrine in the area, and the reasons why no puja is performed in some of the temples. As we read Shashi Deshpande’s novel, we realize that the inhabitants of Rajnur are linked with one another for generations through distant kinship, ties of loyalty or hostility. The book Devayani is translating was written by her mother’s teacher. Some ancestors of the present population might have gone to school together, some were taught by the aunt of another, and the SP sahib’s uniformed driver turns out to be the son of the narrator’s mother’s domestic help. In such an intricately webbed community Devayani’s unlikely friendship with a new arrival in town—former film-star Priya who is surrounded by a halo of wealth, fame and beauty, is naturally put under a scanner by the local people. It is a minor miracle that in this fish-bowl, her love affair with the District Superintendent of Police—remains a secret for several months, or at least so Devayani thinks. Where is the sannata that Priya dreamt about? Perhaps only in the submerged childhood memories of Devayani which occasionally surface as nightmares.

Shashi Deshpande, who grew up in Dharwar, can evoke a small town with a precision that is matched only by her ability to bring alive the tangled relationships in an extended family. Even when they are geographically separated, networking among cousins, nephews and nieces—at uneven levels of intimacy or acrimony—is very much part of our lives in India. This dimension of messiness that we are comfortable with, is seldom represented in novels from Britain and America that one grew up reading. One reviewer of The Country of Deceit found Shashi Deshpande to be as bad (or is it as good?) as Jane Austen because her books have too many uncles, aunts and cousins. I am puzzled by that comment, because except in Mansfield Park I do not know where to look for aunts in Jane Austen. In Austen’s ‘two inches of ivory’ neighbours may be curious or interfering, but the nuclear family is the norm. On the other hand Deshpande revels in the amorphousness of connections within the family, which includes many who are `almost family’. In this novel we do not actually see all the relatives—some we get to know through their letters, some are already dead, and the author refuses to put these characters into ready-made boxes. An elderly aunt, a cancer-survivor, is the most ebullient figure in the novel, unconventional and free of inhibitions. Her letters from USA, where she is visiting her daughter, convey her amusement at the absurdity of the news items published in the papers there. She reports them gleefully as ‘Notes about the “animal life” on this continent’ just as Dawrin’s friend had done in another century.