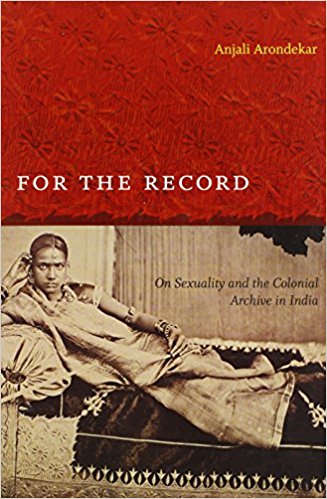 Voice of Archival Absence
Devika Sethi
FOR THE RECORD: ON SEXUALITY AND THE COLONIAL ARCHIVE IN INDIA by Anjali Arondekar Duke University Press, 2011, 215 pp., 395
May 2011, volume 35, No 5

The relationship between sexuality and empire in the context of South Asia is one that has received much, and muchneeded, scholarly attention in recent years. Since one kind of archive or another is used by scholars and activists in the field of sexuality studies to form and/or legitimize their case, Arondekar finds it necessary to interrogate the nature and authority of the archive itself, specifically with regard to its value as a source for studying sexuality. In doing so, she follows in the path of what is now a wellestablished tradition, but adds new dimensions to the critique. The archive is, for Arondekar, a repository, but one that does not yield its secrets easily, is easily amenable to being read simplistically, and contains multiple meanings. Following Ann Stoler, and extending as well as illustrating her thesis with very relevant and illuminating examples, Arondekar argues that the context from which traces of sexuality emerge is as (if not more) important as the content of the traces. In this work as in her earlier essays, Arondekar repeatedly cautions against recognizing the archive as the total site of colonial knowledge.

The critique of the archive as a sourcein fact, the legitimate sourceof academic inquiry questions the vision of a total, comprehensive archive, where facts await the eager historian, and then, having been found, speak for themselves. The central premise of this book is that absence, from and in the archive, speaks louder than presence. Arondekar questions the model where the archive is the place of both first and last resort for those seeking to find the historyand from that, the legitimacyof sexuality. She does not reject the archive (and depends heavily on archives of various kinds herself), but rather makes a wellargued case for treating the archive more as a subjectthan merely a source–of study.