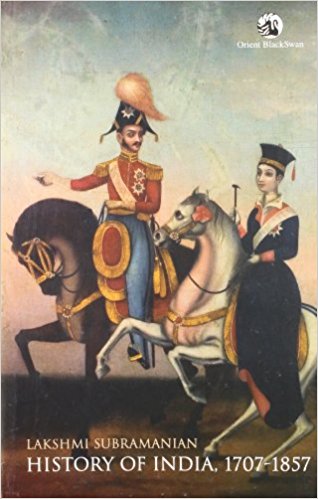 The period 17071857 is one of the most fascinating in the history of India. It in effect laid the foundation for colonial modernity and had a profound impact on the making of modern India. As such, when a noted cultural historian writes a survey book on this period ones expectations are of a different kind. Lakshmi Subramanian is also a wellknown scholar with a focus on the history of South India. Both these specializations could have informed the text better and made this volume a meaningful entry into the world of textbooks. It falls short of the expectations that a work by such an eminent scholar arouses. Nevertheless, it is a useful summary of information and interpretations, in five interlinked chapters and an epilogue, about political, administrative, economic developments and the social and cultural changes in India under Company rule.

Her focus is on the eighteenth and the first half of nineteenth century Indiaa period of high drama (p.1)when the Mughal decline followed an era of transition in which colonial penetration and the ensuing complex developments resulted in trends that signified a major social transformation. She concurs with recent scholarship that the eighteenth century can be seen as a period of the early modern and the next one as colonial modern (p. 217).