The PalestineIsrael Question: Going Back to the Roots 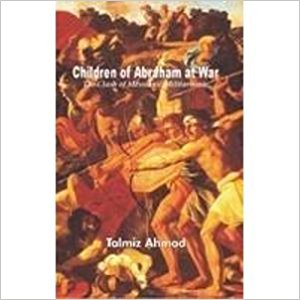 The PalestineIsrael Question: Going Back to the Roots
Rajendra Abhyankar
CHILDREN OF ABRAHAM AT WAR: THE CLASH OF MESSIANIC MILITARISMS by Talmiz Ahmad Aakar Books, 2011, 475 pp., 1250
May 2011, volume 35, No 5

The perennial question which arises in the mind of anyone even generally familiar with the PalestineIsraeli issue is the reason a solution has bedevilled the many attempts during the 65 years since the Second World War. Talmiz Ahmeds splendid, well-researched, and cogent analysis of the root causes of the issue goes to the heart of the matter; in projecting the force and enduring quality of longheld beliefs, perceptions and prejudices on both sides of the divide, his magnum opus reinforces the sentiment that light at the end of the tunnel will be long in its coming. At the same time in the larger discourse between the three monotheistic religionsChristianity, Judaism and Islamthe Palestine issue is only the eye of the needle. The strength of orthodoxwhich in the original Greek means rightthinking (sic)(or fundamentalist, rabid or howsoever you may want to call it) messianic ideology in the three religions has been an overarching thread since their beginnings raising the classical choice between assimilation and annihilation.

It is only when we see a complete and distinct change in the mindset of the protagonists can we hope for a movement towards an equitable solution in which Abrahams Children will be able to live side by side in peace and security.

During the last decade West Asia has seen unending violence between the Palestinians and Israelis further aggravated by the US invasions of Iraq and Afghanistan. The sense of the West being at war with Islam is complete. The author has lauded US President Barak Hussein Obamas intention to deal frontally with the problems between USA and the Muslim world when he acknowledged in his Cairo Address on 4 June 2009 that the Palestinian people Muslim and Christians have suffered in pursuit of a homeland for more than sixty years…endured the pain of dislocation…daily humiliations large and small that come with occupation. Yet eighteen months on, his wish remained just that when the Americans declared that the latest direct talks, stalled since September 2009, would not resume. It is a bitter failure in the face of the overwhelming power that the settler community has come to embody in Israeli politics. For the Palestinians the prospect of a real state now looks as bleak as ever. Talmiz Ahmeds erudite book is a must read if one wants to understand the roots of this impasse which lie in the basic beliefs of the three religions.