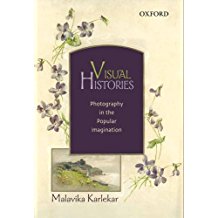 Malavika Karlekar’s book is a series of snapshots—I use the term deliberately —of not just colonial and post-Independence India, but of the history of photography itself. In the Introduction we are informed of Karlekar’s assumptions: ‘the mandate of Empire necessitated the introduction of several institutions, innovations, and styles of life into the colonies. The camera and the studio became necessary prostheses in this new engagement between peoples’ (p. xiv). From this assumption Karlekar begins her survey of the visual regimes of the Empire in India.
Starting with studies of the colonial bungalow, camps and other residential structures of the Raj, Karlekar moves on to ethnography and criminology where ‘fixing’ the identity of tribes as criminal becomes, in her view, one of the pre-eminent uses of photography. Exoticization of the native, especially women, in the form of postcards, served, Karlekar says tongue- in-cheek, as tropes for the ‘most prized jewel in Victoria’s increasingly heavy crown’ (p. 13).