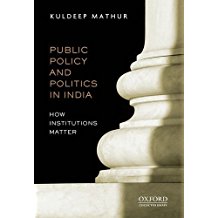 This book is an attempt to put together some of Professor Kuldeep Mathur’s research essays that focus on an analysis of India’s public policies in the pre- and post- 91 era. These essays have been published as articles in journals, as monographs, or included as chapters in books edited by others. These are not micro studies of specific public policies in India, but reflect or attempt to explore the visible and often invisible factors involved in the processes of public policy making in India. The chapters in the book focus on a common theme—the complexity of public policy making in a milieu of democratic politics in today’s post-liberalized India, where, in addition to state institutions, the corporate sector and civil society organizations have begun to play a more substantive and visible role in producing public policy. These are being formalized through the creation of new kinds of agencies and partnerships. A multi-actored ‘network governance’ structure is replacing the single focal point of government. Some chapters in this book have explored the actual process of policy formulation in specific sectors.

Kuldeep Mathur rightly states that much of the field of policy analysis has been dominated by the literature emanating from a techno-rational perspective, where economists and scientists have dominated till recently. This rational technocratic approach greatly overlooked the arena of contestation in policy formulation, of bargaining and compromises between interested stake-holders in the arena of politics.

If individual policy makers are inconsequential in the Marxist tradition, the pluralist approach perceives them as neutral arbitrators in negotiating compromises among diverse conflicting groups. Perhaps the most seminal contribution to the re-emergence of institutions in the policy science literature is the work of James March and John Olsen. They visualize institutions not as formal structures but rather as a collection of norms, rules and routines. Institutions provide the ‘logic of appropriateness’ that influence behaviour. The currently popular public choice theory treats politics as a market place, arguing that the rational way is to allow groups to compete freely without encumbrances and the role of the state is to facilitate the interplay of the social forces by diminishing its own role as well as those of its officials in this political market.

The field of policy studies has received different kinds of attention from different scholarly persuasions. The fact that policy studies in India reflect a rich diversity of approaches to policy analysis is clearly evident in Kuldeep’s survey in the book itself. In the pre-liberalization era the Planning Commission was the pivotal institutional agency for policy analysis besides individual studies by policy scholars such as Pranab Bardhan, Kuldeep Mathur, Niraja Gopal Jayal, Ramachandra Guha, Achin Chakravorty and others who analysed macro or micro public policies in India in different studies.

More recently, policy studies in India has gained considerable ground. These have mainly drawn upon theoretical approaches developed in the West. Broadly, recent mainstream policy literature has drawn upon cost benefit evaluation studies, neo-institutionalism, neo-Marxist analysis and a mix of pluralist approaches. As a result, the theoretical focus has now shifted from state institutions per se, to societal institutions that provide the arena for political contestation between groups. Kuldeep Mathur then looks at some recent public policy studies in India using diverse tools. Jenkins utilized an institutionalized approach to interpret the political mechanism that facilitated the reform process in India. Elements of March and Olsen’s neo-institutional analysis are salient in Ashutosh Varshney’s study of the design of India’s new agricultural policy. Kuldeep Mathur and Bjorkman utilize an institutionalist perspective to explore the role of key individuals by focusing on cabinet ministers and civil servants in policy making. In another study by Kuldeep Mathur and Niraja Jayal, India’s drought policy is critically examined. The field of environmental policy has also attracted a rich contribution through a critical analysis approach.

After 1991 the alternative development discourse broadly engendered by NGO type policy research institutions moved policy research from an interdisciplinary focus towards the very reconceptualization of the meaning of democracy. The emergence of the concept of governance brings into focus a new range of multi-level actors in the policy making arena which includes various governmental institutions, civil society organizations and international organizations. Mathur has correctly emphasized the advantages of this new approach when policy analysis should move away from a so called objective and neutral policy analysis to a more participatory democracy where citizens can take part in meaningful debates and contest policy issues that deeply affect them. Moving beyond identifying incremental solutions to specific government programmes, this research orientation seeks to empower citizens to participate in decision making and engage in a transformation of policy analysis centering on the citizen who is the ultimate recipient of all public policies.

The book will be of as much interest to scholars and practitioners of public policy as to an ordinary citizen interested in knowing how public policies are made, reformed, and reformulated if necessary in any democratic state. It will increase our understanding of how policies are designed in a multi-actored setting and a democratic political context. Professor Mathur reminds us conclusively that public policies are always political statements and not mere techno-rational output of state action. The book argues very successfully for enhanced scholarly attention to this neglected area of social science research and study in India.