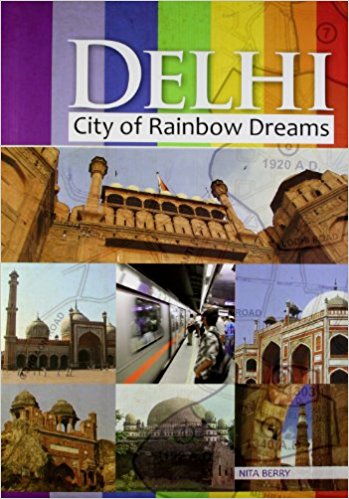 Historians have written about Delhi in authentic detail but it needed a writer for children to paint it in the seven colours of the rainbow. This is what Nita Berry, a freelance journalist and writer of fiction and non-fiction for children, has done. Her book The Story of Time (CBT) was awarded the prestigious Shankar’s medal. A member of the Executive Committee of the Association of Writers and Illustrators (AWIC) and for several years the editor of its journal Writers and Illustrators, she is ‘a homegrown Delhiwallah’.
Nita Berry tells the story of Delhi in its various phases, mythical to modern. Her book opens with a simple but colourful double-page map of Delhi showing its seven cities and their dates.

The short Prologue makes an important statement: ‘Many a dream turned to dust here, and many a dynasty crumbled through periods of darkness and despair. But nothing could crush the spirit of Delhi. It was always there to resurrect, for the adventurous, the brilliant and the brave. And so it survived, Delhi defied history.

Indeed it seems as old as time itself. Here, every niche and stone tells a tale-of terror and valour, of violence and sacrifice. The eternal Yamuna that has flowed by the city through the ages, sometimes quiet sometimes raging, bears witness to the glorious and tumultuous years of Delhi’s chequered past and its living link with the future.’

In the first chapter, ‘Before the Dawn of History’, there is a reference to the Mahabharata: ‘They called it Khandavaprastha, or the city of ruins. Desolate and overgrown, it was a settlement long forgotten-a veritable ghost city, occupied only by birds and beasts, and very likely a hideout for thieves’ (p.11).
This is what the sons of King Pandu had received from their uncle Dhritarashtra, de-barred by his disability from being king himself. With their united efforts (and some superhuman intervention), they built an Indraprastha on it that was the envy of Duryodhana, and which certainly contributed to the Kurukshetra War.
After their victory, the Pandavas built a temple to Krishna’s sister Yogamaya in Mehrauli. In the 19th century, Queen Mumtaz Mahal sought the favour of the goddess for her son Mirza Jehangir who had fired at the British Resident from the Red Fort. The favour granted, she placed a pankha or fan made of flowers at the Yogamaya temple (and a chaadar at the shrine of Bakhtiyar Kaki). The flower festival Phoolwalon ki Sair, commemorates this, every October.

This interweave of narration, information, history, culture and belief is used in all the chapters. ‘Dillika: The First City’ traces the name to Raja Dhilu of the first century BC, referred to in the Rajasthani epic Prithvi-rajaraso, and relates stories about the Iron Pillar, the Qutb Minar , the Hauz-i-Shamsi, and, of course, Raziya Sultana.

In the chapter on Siri, the second city, so named because it was founded upon severed ‘sir’s or heads of Mongols defeated by Alauddin Khilji, there are references to Amir Khusro, the poet and Sufi mystique from Alauddin’s court whose spiritual guide was Hazrat Nizamuddin. It was he who pioneered Indian-based Persian and Islamic literature, Hindustani classical music, qawaali, the tabla and the sitar. Nita Berry combines the military-cum political aspects with the literary and cultural, and as pointed out, this is the approach throughout the book.

Tughlakabad and Jahanpanah and Firozabad, the third, fourth and fifth cities, are discussed in the next three chapters. Muhammad bin Tughlak was the first in India to issue token money. Following the death of Firoz Shah Tughlak and the invasion of Timur, Delhi fell into a ‘sleep of death’ (p. 53). When it woke up, it was no longer in control of a great empire. The Lodi sultans reconstructed the Delhi Sultanate to some extent, leaving the legacy of the Lodi Gardens. Nita Berry next refers to the visit of Guru Nanak in 1505, mentioning Gurdwara Nanak Piao ( in Sabzi Mandi) and Majnu-ka-Tila (on the right bank of the Yamuna) in this context. She also de-mystifies the names Masjid Moth and Jamali Kamali (off Mehrauli-Gurgaon Road).

The sixth city is Sher Shahi, better known as Purana Qila, ‘constructed on the very site where the magnificent Indraprastha had once stood’ (p. 63). Today’s generation is quite familiar with the seventh city, Shahjahanabad or the Walled City of old Delhi. Perhaps that is why Nita Berry touches only lightly upon Lal Qila, Jama Masjid and Chandni Chowk, following it up with a brief account of the fall of the Mughal Empire. The gurdwaras of Bangla Sahib, Sis Ganj and Rakab Ganj are discribed as also the successive loots of Delhi, using lines from the contemporary Urdu poet Mir Taqi Mir. Bhahadur Shah Zafar’s own lines too are used in telling the tragic story of the last Mughal emperor-who died hankering for ‘two yards of land’ in Delhi.

The title of the book implies seven to be the number of dreams Delhi has stood for. But the rainbow did not end with either the Mughal or the British Empire. It came up in new colours. Delhi was made the capital of British India in 1911 and continued in that position after Independence. The tenth chapter covers Lutyen’s Delhi (the eighth city?), radiating from the centre of the Viceroy’s House (now Rashtrapati Bhavan). The Epilogue pays tribute to ‘New Delhi Today’ (the ninth city?), where ‘the spirit of Delhi lives on’.

Printed in Malayasia, the book is a fine and finished product. Photographs and sketches accompany the mellifluous text, although the artist(s) have not been mentioned by name.