Origins and Development of the Mahayana 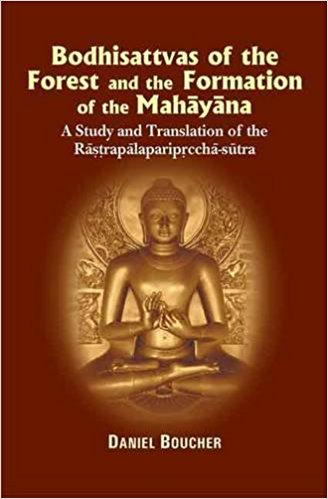 This is an excellent book, one which should be on the list of anybody interested in the question of the origins of the Mahayana. Studies of this issue have come a long way since 1907 when D.T. Suzuki, in his Outlines of Mahayana Buddhism (1907) started with a set of premises about what the Mahayana should be and then tried to read back into the past from that to find its origins. Perhaps the most influential twentieth century development in understanding the origins of the Mahayana is to be found in the works of the Japanese scholar Akira Hirakawa who arg-ued in the nineteen fifties that its origins lay in cults which developed around stupas rather than in monastic communities, and these views are best known through an English tran-slation of one of his works A History of Indian Buddhism (1990). This idea was then challen-ged by a number of authors. First, Gregory Schopen, who argued from the mid-1970s, for instance in some of the articles in his work Bones, Stones and Buddhist Monks (1997), that inscriptional evidence shows that the origins of the Mahayana were perhaps much later than many had thought and lay within the monastic Sangha itself.

Yet another counterpoint was also argued by Reginald Ray in his Buddhist Forest Saints (1994) in which he argued that the origins of the Mahayana lay in traditions of forest dwelling monks involved in medita-tion. This was then followed by an innovative and powerful theory in A Few Good Men by Jan Natier (2003) in which she proposed that Mahayana should be seen as an elitist move-ment within monastic Buddhism. Finally in this sequence of ideas we have this book itself, in which Boucher puts forward an argument similar to Natier’s and proposes that the Mahayana’s origins are to be found within monastic Buddhism amongst groups focusing on developing hierarchies of superior practices based on continued residence in monasteries combined with forest based ascetic practices.

Both Natier and Boucher argue against one of the dominant conceptualizations of Mahayana and argue that an initial sense of Mahayana, literally ‘great vehicle’ was not that it was great, in the sense of allowing many to ride in it, but rather it was a vehicle for the elite, the great, only. This is a radically diffe-rent understanding than Hirakawa’s argument which sought the origins of Mahayana as a popular lay tradition.

Boucher starts in his introduction by su-ggesting a possible parallel with the way in which the Mormon Church sees itself as retur-ning to the original form of Christianity, and how early Mahayana movements might also have had similar reformist motivations. He then goes on to lay out how he will examine three interrelated themes, the glorification of the Buddha’s body, criticisms of sedentary monastic life and praise of the life of a forest dwelling ascetic. However, it is important to note that he does not agree with Ray’s views (p. 62) and argues against a vision of there having been an entirely separate forest dwelling tradition. Rather he sees the issue as focused on intramonastic disputes about the nature of the practice.

The treatment of glorification of the Buddha’s body in the first chapter reveals the complex, and relatively little studied, relation between the 32 characteristics of perfection in Buddha’s body and the veneration of the body of the Buddha as a focus of devotional activity in Buddhism. In this context he also points to the importance of the jâtaka, previous life stories, but shows how he differs from Hira-kawa and rejects the equation of Mahayana with stupa cults which are associated with depictions of scenes from the previous lives of the Buddha.

Another significant theme which Boucher takes is the practice of self harming, offering the body to the Buddha, dehadâna, and its relation to asceticism. This finely argued sec-tion allows Boucher to demonstrate the ways in which there was tension over this issue in Buddhism with some sources praising the practice, and others criticizing it. It is also one of the first points in the book where Boucher’s prodigious abilities in Sanskrit, Prakrits, Chinese and Tibetan, not to mention Japanese, allow him to produce a finely nuanced analy-sis. Particularly striking is his contrasting of materials from Santideva’s Sanskrit works with eye witness accounts of self harming practices translated from the works of the Chinese pilgrim Yijing (pp. 34-38).

The central argument is that networks of followers of Bodhisattva traditions developed and their ideas can be seen in works such as the Râstrapâlapariprcchâ-sûtra which forms the focus of this volume. He argues that this has to be seen in relation to longstanding debates in Buddhist tradition over the relative merits of forest dwelling monasticism and settled sedentary life in monasteries. One factor which also allows him to make such an in- depth study is that the central text he translates here is available in a third century C.E. translation by Dharmarakca, in Jnânagupta’s late sixth century translation, Dânâpâla’a late tenth century translation into Chinese, and ninth century Tibetan translations and still later Sanskrit recensions from Nepal. This allows him to trace the ways in which the text grew and altered over time and developed in its antipathy to settled monastic life and in its praise of forest dwelling asceticism.  However, he is also able to show that fundamentally it represents a fairly conservative tradition (p. 73) and actually focuses on a few of the issues which might traditionally be seen to have characterized the Mahayana, such as a focus on teachings about emptiness. Nor yet does it share in the exclusivist tendencies of works like the Lotus Sutra (p.74) and is instead a work which testifies to an era in Buddhism in India in which many paths towards liberation coexisted within settled monastic Buddhist communities. He identifies as critical to the development of the text, and to that of the Mahayana, the period between 270 and 550 CE, corresponding to the Gupta period in North India. This period was one in which he argues that the networks of followers of Bodhi-sattvas, which were in his view in a sense the origins of the Mahayana, first became part of the mainstream as seen in inscriptional evi-dence. This is also the period when the most vitriolic criticisms of settled monasticism appeared in the text of the Râstrapâlaparip-rcchâ-sûtra and this reflects the depth of disagreement in the Buddhist sangha of the time over the emergence of Mahayana traditions.

“…this book forms one of a series of vital links in the study of the origins and development of the mahayana.”

There are also numerous other points made in this work which would in some cases be worthy of development into independent works. These include fascinating theories such as the possibility of the prevalence of Maha-yana texts in early translations into Chinese may have reflected not so much the domina-nce of the Mahayana in India at the time, but rather its followers seeking refuge outside of India (pp. 108-10).

The scope of the study is also revealed by the detail in which it examines how possible misunderstandings arose in the process of translation from undetermined forms of Indic languages, including possibly both hybrid Sanskrit and Prakrits, into classical Chinese. For this alone, this book, I would suggest, must be read by anyone who is interested in how Buddhist teachings were translated into Chinese. It has the best description and study of this process which has been made so far in many ways. In particular the study of the descriptions of the process of translation in the colophons of various works by Dharmarakca is fascinating. Boucher is able to show that roles that Dharmarakca, a Yuezhi monk born in approximately 229 CE in Dunhuang in Central Asia, and other central Asians and Chinese had in the translation process. In a number of cases he is able to vividly depict how whilst the translation of a particular work was spoken of as being by Dharmarakca, it was the product of the joint efforts of work by a team of people from India, Kuch, Dunhuang and Chinese assistants working in Dunhuang and Chang’an.

The translation of the Râstrapâlapari-prcchâ-sûtra is a rare example of a scholarly work which is also easily readable. Further-more the device of printing in bold print those sections of the text which appear in the earliest translation by Dharmarakca, and in lighter print the portions found only in later transla-tions works very well. It allows the reader to immediately grasp the ways in which the text had grown over time.

The depth of scholarship in the book and the author’s abilities across a broad range of South and East Asian languages makes this essential reading for anyone interested in how Buddhism spread from India into Central Asia and China. Furthermore, this book forms one of a series of vital links in the study of the origins and development of the Mahayana.