Love Beyond the Pale 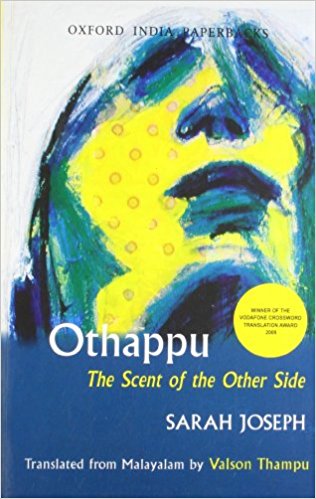 Othappu does not exactly mean ‘The Scent of the Other Side’, as readers may tend to think, looking at the subtitle! It is a word to be found in the Malayalam Catholic Bible meaning ‘to stumble’ or ‘to falter’ from the straight way of the faith and to turn to evil ways (p. xx). It is the resultant scandal when someone chooses to go against the accepted norms of religious and, therefore, social behaviour in the Catholic community. And so the novel begins with the protagonist, a nun, deciding to leave the convent to assume the ordinary garb of a lay person and seeking the way of her ‘body’. It is the doomed tale of Sister Margalitha’s love for a priest Karrikan, their decision to defy religious edicts and find a life together, while facing the unpardoning, cruel, social ostracism meted out by a shocked community.

Sarah Joseph does not paint a picture of idyllic forbidden love, alluring in its scandal value, with voyeuristic relish. This is a harsh take on religious bigotry, social sanctions, blind faith, and the stifling brutality of the immediate family when they realize the stigma that will attach to them by this act of defiance.

The novel reveals to us the stranglehold of institutionalized religion and the complete unforgiving resolve of the Church to stem any such further rebellion in its ranks. She counterpoises the lack of compassion in organized religion with the solicitous concern of different ways of faith in non-conventional ways. Hence the healing touch of Rebekka, a parallel rebel figure from Margalitha’s family, holds a different kind of mass that gives peace to many people. She is the only one who dares to give her succour when she gets to know that Margalitha has returned to her familial home and is imprisoned in an almost airless room with no amenites in a house with plenty of bedrooms with attached baths. For that is what women who step out of faith can expect even from their immediate family who are more scared of what people will say than try and help the ‘prodigal daughter’ to reestablish herself in society. Even her own mother wishes Margalitha dead and makes Karikkan wonder ‘…what exactly made one eligible to stay alive’ (p.67).

The storyline is simple insofar as it follows the travails and trials of Margalitha who is cast out by family and church but is befriended by strangers and atheists willing to give her and Karikkan a chance. The strong woman protagonist is sketched as strong willed, resistant, compassionate but at the same time, a bit cut off from reality because of religion and her initial social background of wealth. She is ashamed of her lack of knowledge of the difficulties the poor face. This harsh encounter with reality awakens her sense of justice while in no way diminishing the passion of her body each time she meets Karikkan. She accepts him with all his shortcomings and total inability to think of finding ways of earning a living. But Karikkan is not the strong pillar she can lean on in times of trouble as he is so full of doubt and questions that he actually repents his leaving priesthood. His father’s suicide pushes him to seek solace again in the church but as a sweeper without any hope in the future. Margalitha is abandoned by the very man for whom she had abandoned the church.

As Jancy James says in her Introduction, ‘There is a recognizable substratum of intellectual and theoretical underpinning in all her writings’ (p. xviii). And this novel is no exception. Sarah Joseph writes her feminist activism into this narrative as she paints a strong portrait of her female protagonist working against all odds as opposed to the spineless male. With each unsavoury encounter, Margalitha emerges a tougher person, courageous to take on the whole world. Nature at its bountiful best is contrasted later with its ravaged landscape and forms a new subtext of environment issues.

But it is this very criticism highlighting the faults of organized religion that makes the reading heavy as the narrative is full of refe-rences to exact quo-tations from the Bible which detracts from a fluent reading of the novel (pp. 126, 158, 159, 196, etc.!). So much so the reader is left wondering at other notes whether they are footnotes by the trans-lator or were present in the original as well (cf. p. 184)!

This is an excellent case study for all students of translation in what the translator chooses to explain, footnote, or to adapt. Seeing this act as a ‘long overdue liberative process’ Valson Thampu rightly says that ‘By translating, we render them [Indian languages] audible in the global arena’ (p. xiv).

Othappu in any case is very much a ‘Study Edition’ as OUP has brought it out with an excellent introduction by Jancy James; an interesting note by the author herself followed by one by the translator Valson Thampu; a dialogue between the author and Githa Hiranyan; Paul Zachariah’s speech exploring the many meanings of the title in Malayalam; not to forget the mandatory glossary and a separate list of kinship terms that is entirely redundant as the context makes the meaning abundantly clear especially to an informed reader aimed at by this version! The excess peritext renders the work rather pedantic and takes away the sheer pleasure of reading. This is a book that must be read, but read when one is in the frame of mind to read such a book. It makes you think, question established practices, and shakes your complacency as you realize how lethargy and inertia can make most of us passively submitting non thinking human beings. This is organic food for the brain.