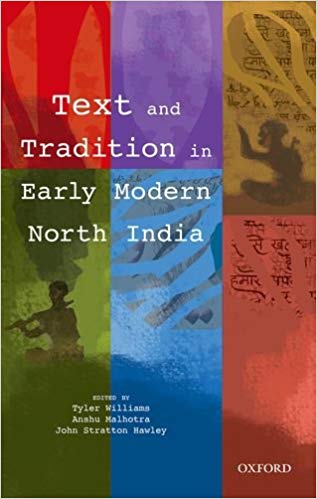 The volume under review is the latest addition in a series of publications that followed in the wake of Sheldon Pollock’s ambitious millennium-by-millennium paradigm for the study of literary cultures in the pre-modern South Asia. This is a collection of twenty-one essays of varied length and uneven research density classified under four different heads and prefaced by an Introduction written by Tyler Williams and Anshu Malhotra. Almost fifty percent of the contributions come from scholars based in North American universities. The rest are drawn from India, England, Japan, and European continent.

Interestingly, the time span covered by the contributions under the rubric of the ‘early modern’ period is thirteenth to the eighteenth centuries. However, the larger number of the articles concerns the later half of that period. The introduction focuses chiefly on ‘connection and exchange’ in differing contexts: across spaces, themes and genres as well as between languages, literary cultures, and religio-philosophical traditions. This goes well with the editors’ understanding of the ‘early modern period’, following Sanjay Subrahmanyam’s formulation, as a period of ‘increased contact among different peoples and across greater and greater distances’(p. xxvi). The mandatory stock-taking of the existing historiography is mostly descriptive and assimilative. The section on the ‘Vernacular History’ within the Introduction is probably more contentious. It posits a contrast between the ‘texture’-based approach to read history in the vernacular traditions (Rao, Shulman, Subrahmanyam) and the postmodernist approach that points to indispensability of the rhetorical even in what ostensibly is only factual (Hayden White).