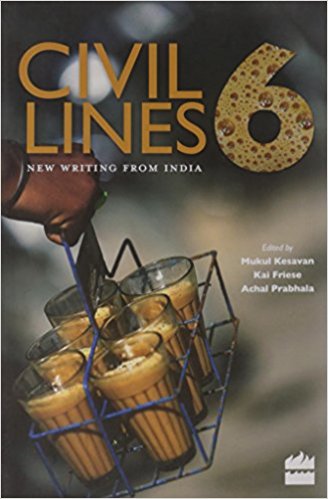 This issue of Civil Lines appeared a decade after the previous issue, and this review a year after that. If, as the editorial claims, the issue contains ‘work that has been written for ever’, the two delays matter little. A little creative re-reading of the editorial claim would let us think that there is nothing new about what exists between the covers of this issue but thankfully such an interpretation is belied almost immediately.

Civil Lines is an urbane journal, one that calls for lazy evenings and long drinks—it is a miscellany for the gentle folks who think reading is a worthy pastime, one that takes them to different worlds and to a heightened sense of awareness, and also one that is a game of language, where you wait for a few pages to utter ‘Well said’. It is akin to watching a game of cricket played by the rules by well-spoken fellows who politely applaud each other. It has no settled batting order though, you turn pages till you find something that seems interesting and the innings begins.

Let me give you the team first—Ruchir Joshi, Itu Chaudhuri (twice), Achal Prabhala, U.R. Ananthamurthy, Ananya Vajpeyi, Shougat Dasgupta, Naresh Fernandes, Manu Herbstein, Anand Balakrishnan, Binyavanga Wainaina, Rimli Sengupta (twice), Nilanjana Roy, Benjamin Siegel, and Gauri Gill. Most of us will recognize some of the names and while the temptation to begin or not begin with their works was there, I began with the essay by the intriguingly named (and for that reason alone) Manu Herbstein.

The piece by Manu Herbstein is titled ‘Building Bridges’ and it has some photographs of actual bridges in India. A South African by birth, Manu was not named so—it is just that as a child he could not pronounce his name Moritz Herbstein and would say ‘Manu’. Curiously, Manu means the ‘second born’ in Ghana, a country he adopted, and we of course know what it means in India, a country he worked in for a couple of years. This essay is about his connections with various Indians and with India, beginning with Sir Benegal Rama Rau who visited their house in South Africa in 1941. The long leisurely and fascinating essay is mostly about life in Bombay in the 1960s, where the author worked for Gammon India, and his social and sexual life there. He makes friends, and meets up with them again (or hears about them) years later in the most unexpected places. I am glad I began with this essay even though I read it slowly and with some amount of wonder. Part of it was caused by reading it in a journal that says it contains ‘New Writing from India’. Perhaps they should remove that subtitle because, frankly, who cares when you get to read some interesting stuff from elsewhere.

Like Benjamin Siegel’s ‘Raagtime’, a piece about Ratan Devi (originally Alice Richardson), Anand Kentish Coomaraswamy’s wife for a while. The essay is about a woman who was married to two famous men, Coomaraswamy and the physicist Francis Bitter, and had quite a successful career as a singer (a Hindustani singer), but seems to have fallen through the interstices of history and memory, not even finding a mention in the biographies of her husbands. This is a fascinating account of the people involved as well as the historical moment. Benjamin is from the US.

And like ‘The Adventures of Idi Amin Dada’ by the Kenyan writer Binyavanga Wainaina. It is not about the Idi Amin we all know, or is it? Idi Amin was a boxing champion, was in the army, was in Kenya, and was reputed to be quite dense. And his father who had converted to Islam called himself Amin Dada and Idi Amin did grow up with his mother. And Idi Amin was well qualified to be a houseboy since he was recruited in the army as an assistant cook. He went up the ranks rapidly later but had already achieved the highest possible rank for a native in the colonial army during the campaign against the Mau Mau—all mentioned in the story. This is a story about Idi Amin and an Indian family he works for, whose son speaks about black power. ‘Idi Amin Dada’ is an intriguing (especially for us Indians) story, one that leaves you wanting more.

Achal Prabhala’s ‘Erazex’ signals the arrival of a writer to watch out for. The story of a school in Dehradun, ‘Erazex’ is about growing up, about our boarding schools, and about the need for human bonds that all of us have. Achal Prabhala has the ability to make characters come alive with a few deft strokes and to tell a story simply. I don’t know if he has written much or even plans to but I do hope he does.

Itu Chaudhuri’s ‘Scheherazade’ is another interesting story. Again, never having read Itu Chaudhuri before, I was quite pleasantly surprised at the writing ability. Here is another writer to look out for. So I read the other story by him and ‘Flight’, a fantasy, was quite different and showcased the skills of the writer. U.R. Ananthamurthy’s ‘The Remembered Village’ will always be of archival interest even though it doesn’t seem to have been written as a separate essay. Ananya Vajpeyi’s ‘The Archivist’, which seems to have come from the times she was doing her doctoral research, demonstrates how easily she can turn her academic hand to creative writing. This is a memorable story about a seemingly unlikely passing of the baton.

Naresh Fernandes’s ‘Skeletons’ seems a shockingly ‘true’ story about loneliness in the midst of a closely knit community in Bandra, Bombay. The way it is written, one cannot doubt that such a thing can happen, that the characters don’t exist. Shougat Dasgupta’s ‘Exit the Gulf’ is about Kuwait and the Indian community there during the times of the Iraqi invasion—I realize how badly read I am because this was the first time I was reading such an account. This is another of the pieces that ensures that this issue of Civil Lines is a pleasure to read, one which gives us unexpected points of view that make us keep it down and think about the vagaries of life and history.

Anand Balakrishnan’s essay, ‘The Muse of Failure’, is another such piece, all the more apt after the failures of the latest Arab Spring(s). This is a wonderfully detailed essay about the mess the world has created and cannot clean up. If Rimili Sengupta’s short experiments leave one slightly bemused, Nilanjana Roy’s ‘Sugarcane’ ensures that the issue never flags—she has already established herself as someone who can write with verve on various matters, and here we see a sensitive portrayal of nostalgia, connectedness, and bonding. Ruchir Joshi’s ‘Great Eastern Hotel’, an extract from a novel in progress, opens the volume, and Gauri Gill’s portfolio of photographs ‘Nizamuddin at Night’ ends this highly satisfying issue—kudos to the editors and to the authors who waited so long to see their work in print. These are editors to keep your faith in.