Many Lives of the Literary Text 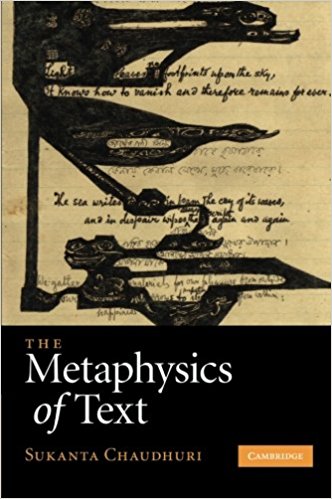 It was said of Albert Camus’s Outsider that having read it, one cannot relate to the world again the same way as before. It leaves you so changed. Something similar can be said of Sukanto Chaudhuri’s Metaphysics of Text. Here it is not the world but the literary text that is the subject.

The questions ‘What is literary or linguistic text?’, and even more, ‘What it is not’, have been obsessively discussed by numerous thinkers over the last hundred years. They have been on the radar of literary scholarship in the West for a few centuries. In India, they had attracted the line of Sanskrit aesthetics for a good millennium.

Probably, the literature classroom has long back nearly banished literature from its precincts and has brought in description of theory to replace it. The production of books and essays in this area so far has been so copious that any new book or essay in the area even with a degree of brilliance has barely a chance of being noticed at all, let alone being read. Given that the metropolis of theory is already over-crowded, Sukanto Chaudhuri’s collection of essays deserves to be hailed as a riveting contribution.

Some of these essays were originally put together as public lectures and conference presentations; but within the covers of the volume, they present an enticingly consistent perspective on the many lives of the literary text. Walter Benjamin had used the phrase ‘afterlife of literature’ to describe translation. Sukanto Chaudhuri’s title ‘Metaphysics of Text’, quite conscious of Benjamin, covers an amazing array of the existential and transitional identities of literary expression.

It brings within its analytical sweep the pre-verbal—the para, pashyanti, madhyama as described in Bhartrihari’s sphota view of language, the intuitive and purely imagined as in the compositions of Wordsworth and Blake, the scribbled—from ancient tablets to John Keats’s occasional notes in book copies of his friends, the rewriting involved in performing Shakespeare plays, the grammatically challenging verse of e.e. cummings and fiction of James Joyce, hand-written works, typed manuscripts, printed books, mimeographed print pages, the oral as recorded on wax-discs as also in audio-visual media, the electronically transmitted copy, the digital signals stored in the memory processing units, the ‘writing’ on the computer screen, the texts circulating in the internet, the texts as placed under the transformative processes in textual commentary, editing, publishing, reception of every kind, as well as texts that are temporally stationed and as they transcend their time, texts migrating from language to language in the form of translations, adaptations, abridgements, retelling, and finally texts that move back and forth in the act of being told or read. The volume also brings into discussion texts turned into magic, texts that stand out as design, texts entirely subjugated to performance, texts that become disembodied sound or voice. Except for the language transaction through telephony and the completely irrational forms of language such as insane outbursts and the mystic silence, every mani-festation of language has been discussed in these essays. And this is marked with an even-keeled philosophical sagacity.

The essays are written so as to make them accessible to their audience and readers. They carry with them a vast scholarship, but without making it overbearing. While they bring in a vast amount of complex concepts, requiring discussion of philosophers, theorists, writers and sociologists mainly from the West, and in a few instances from India, the writing is completely free of obscurity and jargon. The essays make compelling reading and conduct the reader through pointing to the incremental turns in the argument and recognition of the continuities. Had it not been for the ingenuity of the insight that together they present, they could have easily passed off as a well crafted reader’s guide to ‘Text’ for use by university students alone. The ingenuity and the insight make better sense when contextualized.

Metaphysics of Text is apparently about the tensions and the passage between the oral and the literary, between the textual and the virtual. The theoretical positions that the author summons to elucidate complex notions involved in the arena may give one the impression that he aspires to add to the same historical line of ideas. His primary engagement however is more with an idea of history than with ideas and their history. The latter he knows in any case as scholars of theory do, and does so far better than the average. His idea of history has three important junctures, the Renaissance in England, the early nineteenth century awakening in Bengal—and which at one time was named the Bengal renaissance—and the creation of the World Wide Web. Well, what is common to the three except that all three resulted in social stratifications creating new intellectual classes? Or that the two renaissances ended up privileging the printed over the written and the written over the oral, and the third is in the process of creating an unprecedented method of writing? And, here is Sukanto Chaudhuri’s main contribution. He demonstrates that the displacement of the oral by the written, the written by the virtual has not been as absolute as one normally likes to believe. In order to do so, he first presents all possible discussion available in the western sources on the nature of text, and then going beyond them without contesting any position in particular, he invokes the idea that the ability to provide hyperlinks is innate to the nature of text. Texts are not just metaphorically ‘other texts’, but every text is materially and metaphorically all text. I for one find his thesis well made as he avoids taking the next step, so easy to take and yet so fatal to the nature of the enquiry that he has undertaken. The next step, the manner in which he develops his argument brings the reader to expect, is to substitute the term ‘world’ for ‘word’.

Any slightly less competent theorizing mind would have immediately invited one or the other of the Indian schools of thought that see All in One and the One in All, but thereby negating the new possibilities of creation. Sukanto Chaudhuri avoids succumb-ing to the easy temptation. Before him, through a very different medium and discourse, John Milton had struggled with this difficulty. The otherwise pantheistic British Romantics too had felt torn between the knowledge of the essential unity of beings—the unity of all texts—and the human destiny to create anew, tossed between being an additive continuity to time and life and individuation proclaiming a revolt against the imagination. Essentially, how to be the maker and achieve this through a Satanic imagination at the same time, has been at the heart of literature as well as the textual history of knowledge in the West. Coleridge probably negotiated this conflict by creating a prophetic vision of the text. His Biographia Literaria describes a curious painting he had seen during childhood in his father’s house, a ship tossed violently amidst gigantic pictorial waves. In his creative life he repeatedly revisited and invoked this image of a painted ship upon a painted sea at once turbulent and still. The image was drawn from the ancient Greek legend surrounding the life of Kubernetes, a sailor who knew how to keep his ship steady even in the middle of a tornado. Not surprisingly, therefore, the modern science for bringing together order and a thermodynamic disorder, Cybernetics, is named after him. Coleridge had probably glimpsed the future of text in its cybernetic manifestations. The Metaphysics of Text very ably shows that a scholar grounded in the Shakespearean textual tradition has a natural passage to the amazing versatility of the internet. However, it is not a blind epistemic leap that Sukanto Chaudhury intends to take. ‘Technologies, no less than religion, breed superstition and blind reliance unless it is continually assessed by critical, inductive, even destabilizing enquiry. The revolutionary technology of the silicon chip poses a still greater need to apprise ourselves of the endlessly promising, endlessly seductive possibilities of the new medium’ (p. 139). The Metaphysics of Text conducts us through an illuminating journey of the idea of text, the oral, printed and virtual, and brings us to the realization that every text is all text. In doing so it does not forget to remind us that this realization is hard earned by every historical phase that truly faces a profound social change spearheaded by great shifts in technologies. The radial extensions of text to numerous other possibilities of expression, to various habits of technology, to trajectories of memory and challenges to imagination, make text the very nerve centre of history, history as writing and writing as history.

G.N. Devy is Chairperson, The People’s Linguistic Survey of India.