A Tale Of (More Than Two) Italian Cities 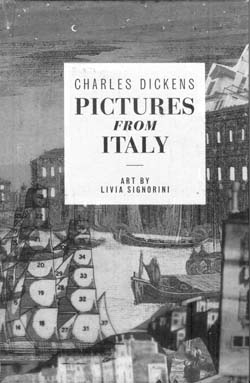 The year gone by was the bicentenary of two Eminent Victorians—Charles Dickens (1812-1870) and Edward Lear (1812-1888). Interestingly both travelled in Italy at around the same time. Lear moved to Italy at the age of 25, in the year 1837, the year of the accession to the throne of Queen Victoria, (to whom, incidentally, Lear gave drawing ‘lessons’)—died at San Remo in Italy in 1888. Lear’s Illustrated Excursions in Italy was published in 1846, based on his travels from 26 July 1843 to around September of the year. Dickens’s Pictures from Italy was originally published in volume form by Bradbury & Evans, London in May 1846, after appearing intermittently in the Daily News, London from 21 January to 11 March 1846.

‘On a fine Sunday morning in the Midsummer time and weather of eighteen hundred and forty-four …….’ Dickens set off from Paris to Genoa via Chalons, Avignon, Marseilles. In other words, within a year of each other, the two gentlemen of London not only travelled in Italy but left for posterity, their impressions in the form of a travelogue, publishing their accounts in the same year. In Lear’s case the text was enlivened by the lithographic drawings from his own sketches. In fact, the raison d’être for his travels was the illustrations.