Urdu Poetry In A Contemporary Context 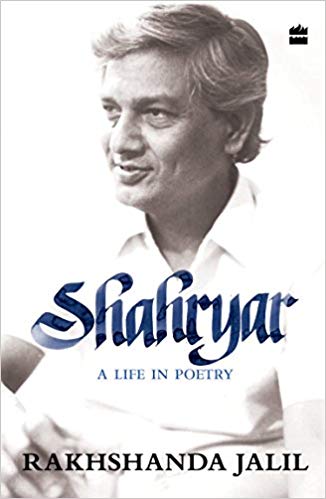 The book written in Rakhshanda Jalil’s inimitable style is about the Progressive Urdu poet Shahryar and is generously scattered with his poetry and personal memoirs which makes an interesting read. The book reveals much that is interesting and unknown about Shahryar the poet and the person, whose personality defied any kind of labelling. It is also an eye opener about the modern context of Urdu poetry. However, it skimps on his wife Najma Mahmood’s contribution towards his development as a poet in objective terms and also that she was a Professor of English in Abdullah Women’s College at Aligarh Muslim University, Aligarh and was a fine poet in her own right. A reference to their work together or in collaboration would have been very enriching despite their parting of ways after a long period of togetherness as has been the case of studies on Ted Hughes and Sylvia Plath. The book is divided into two major sections, the first about his life and his poetic style, the second of selections from his poetic works.

Early in the book Jalil indirectly refers to one of the objectives in writing this book, namely to place Urdu language and literature as a sign of India’s syncretic culture through a portrayal of the life and work of a celebrated Urdu poet.
In the chapter titled From ‘Kunwar Sahab’ to ‘Shahryar’ she says: ‘If ever there is a writer who can most effectively debunk the absurd misconception that Urdu is the language of Muslims or the cultural repository of Muslims alone, it is indeed Shahryar.’

Shahryar spent most of his life in Aligarh and as a Professor in the Department of Urdu at Aligarh Muslim University, Aligarh and Jalil gives us a peek into the life and work at the University through Shahryar. In fact the contemporaries of Shahryar the poet and Shahryar the academic get a fair share of mention in this book. However, she has used Aligarh instead of Aligarh Muslim University, which provides such a rich and varied literary and cultural background for Shahryar’s life and work and one wonders how calling it just Aligarh can actually represent the true spirit and character of so distinguished a place where his genius took birth and was nurtured.