Unmasking the RSS for the Masses 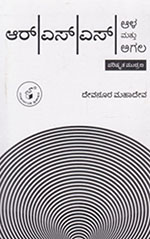 In the new lows that we have reached in our national public lives, none has been as troubling as the self-imposed silence by many writers on the depredations of the RSS and the BJP.  Of those who do write critically, about the multiple erosions of our democracy and cultures, it is to a consenting audience or as in the English academia it is in the language of liberal social sciences.  Amidst all this, the ability to reach out to the larger society, now on the threshold of a mass society, and speak to its varied members in idioms and terms that they can understand about the troubling trends in the nation, the implications of the loss of democracy, pluralism, secularism and an overall sense of collective forbearance has been very limited.

Devanoor Mahadeva’s Kannada booklet, RSS: Aala Matthu Agala overcomes this key limitation and he deploys idioms, imagery, and narratives derived from folklore and rural culture to provide an accessible critique of the RSS.  Going beyond the now standard construction of the rise and rise of the BJP as being driven by the Shah-Modi ‘double-engine’, Devanoor casts his observant eye and literary skills to lay bare the ‘innards’ (antara) of the RSS which in reality is the ‘life-force’ (prana) behind the onset of ‘total authoritarianism’ (sarva sarvaadhikara) in the nation. In critically reviewing its historical antecedents and pointing to its current impact and future implications, Devanoor unpacks the ‘width’ of the RSS’s reach into our societies. By laying out the multiple ways in which the RSS has laid siege to the foundational structures of the nation, he portrays the dangerous ‘depth’ that it has reached. That the booklet (facilitated by a publishing arrangement that encourages both multiple and local publication and subsidized rates for bulk sales) has sold one lakh and six thousand copies in the first month of its publication is testimony to the author’s ability to speak to the people and lay bare the machinations of an organization that has created ‘trouble, suspicion, and hate’ (gondala, anumana, dvesha) in our national life.