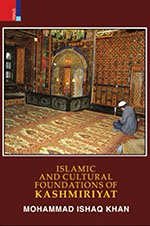 Mohammad Ishaq Khan’s book, brought out eight years after his death, is a collection of articles published/presented over the years by him. The articles have been selected in order to match the theme of the book. In a time when serious aspersions are cast on the concept of Kashmiriyat, and also when the concept has been gravely abused, the book is an attempt to save Kashmiriyat against such raging tides. Khan argues that the advent of Islam in Kashmir did not wedge the communities on the basis of different religious backgrounds, rather it bespeaks an urge for a more egalitarian society based on the notion of human dignity while at the same time sticking to centuries old local traditions. Islamic egalitarianism permeated the consciousness of not only commoners but also of elite groups in Kashmir, and was spread by numerous Sufis, particularly Rishis through the message of love, while denigrating any kind of violence. In fact, the whole book revolves around the impact of these Sufis and Rishis on the progression of not only Islam but society as a whole in Kashmir. The Sufis mostly came from Central Asia and Persia, whereas the Rishis were an indigenous order revived by Sheikh Nurudin Rishi.

The author talks about the two important developments which took place during the initial stages of Islam in Kashmir (early Sultanate period). First was the revolt by Lalla Ded/Lalleshwari, a Hindu yogini, against the ‘social and spiritual pretension of Brahmans’ (p. 32). She is revered by both the Pandits and the Muslims of Kashmir even today. The second important development was the revival of the ancient ascetic order of Rishis under Sheikh Nurudin Rishi. The underlying philosophy of Rishis was coexistence of individuals with other religions and cultures, and a deep commitment to the sacredness of human life and all of its manifestations on this earth. The Rishis practiced celibacy, ate only vegetarian food, avoided harming animate beings including insects, animals or plants, and these practices were not in consonance with the core Islamic tenets.