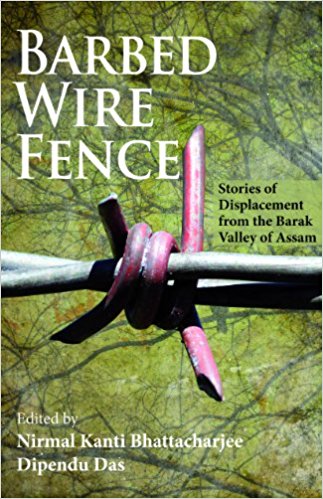 Barbed Wire Fence is a collection of short stories translated into English from the original Bengali versions dealing with the sociological, political and psychological problems arising out of the mass scale migration of Bengalis from East Bengal to the Barack Valley in Assam during Partition (1946-7), as also the migration of the Bangladeshis after the 1965 and 71 wars. They also deal with the large labour force that migrated from various States in India to the Tea Estates in Assam to earn a livelihood. The trials and tribulations of a people driven out of their homes trying to settle down in a new environment and wanting to be accepted in that environment and on the other, the prejudices, anger, violence against the ‘immigrants’ of the local Assamese population wanting to drive them out have been expressed simply but poignantly and powerfully in the various stories. Some of the stories also deal with similar problems faced by the labour in the Tea Estates of Assam. Despite having worked and toiled for generations in the tea gardens they are still not accepted as part of ‘us’—they still remain the ‘other.’

The expressive yet subtle way in which a subject of this nature has been dealt with is commendable. Anger, hatred, intolerance, violence, stoning of people, burning houses, bloodshed, all find a place in the picture of this very trying and troublesome period but the stories are not just tales of gory details of the violence. The social and political issues are beautifully woven into and enmeshed in the fabric of the everyday life of the people living in Assam.