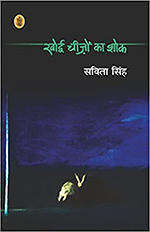 Amuch-admired traditional genre of poetry, elegy does register the harrowing nature of grief that one experiences at the departure of someone very close to us and whose nagging absence never ebbs.  The conventional elegy unravels an ever-growing sense of total despair in the form of sorrow, longing, yearning and pining entwined with loneliness, but it also appears banal, repetitive and undramatic.  Its plaintive form leaves one to look for grief poems that veer away from the conventional poetic outpouring of sorrow which  Samuel Taylor Coleridge (1772-1834) describes as, ‘A drowsy stifled, unimpassioned grief’.

The collection carrying fifty-two nuanced and succinct poetic renderings of tribulations spell out the contours of desolation and separation. The poems mask and reveal various layers of anguish but with apparent ease. With his tantalizing and poignant interventions, the grief-stricken narrator finds solace in anhedonia. His intermittent soliloquy with occasional rhetorical flourishes exude the meaning slowly but provides no clue to recover from the emotional loss, which in final reckoning emerges as the cherished possession.

Savita juxtaposes the objective situation (bereavement) and slippery and equally complex subjective emotion (grief) to upend the simplistic exploration of both.

For her, the utter loneliness caused by the untimely departure of the loved one does not trigger tizzy upheaval. However, it nonchalantly results in unplumbed emptiness, which covers the world with a net. Each strand of the net denotes a kind of self-indulgence, deep-seated infelicity and a marked disdain for the possibility of pleasure. It conjures up an intriguing sense of contentment which also causes a sense of  bewilderment: