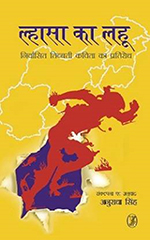 Lhasa ka Lahu is a critical translation of three Tibetan poets writing from exile in India: Tenzin Tsundue (b. 1975), Bhuchung D Sonam (b.1972) and Tsering Wangmo Dhompa (b. 1969). Of the three, Dhompa is the only female poet in the collection and holds the distinction of being the first Tibetan woman to be published in English.

One of the most poignant poems in the collection is Tsundue’s ‘Mumbai ka Tibbati’. Ably rendered into Hindi, the poem inhabits the constant conundrum of the Tibetan who is rejected by mainland India for looking and sounding like a ‘Beijing se bhaaga hua Chinese’ (a runaway Chinese) or ‘koi retired “Bahadur”’ (some retired Bahadur). The title of the poem offers this much misunderstood and loathed figure a sense of place: this is a Tibetan of Mumbai, at once Tibetan who wants to rest and be allowed to dream (use thodi neend chahiye aur ek sapna’/ ‘he needs a little sleep and a dream’), in order to be transported to the Himalayas in the morning only to return to Churchgate by night. Significantly, this poem does not function by nostalgia: the Tibetan’s place both in India and away is clear to him, it is both at once, with the poet clearly writing this nuance into the poem.

Dhompa’s short prose also appears in this collection. A moving ‘Teesra Path’ tells the story of a son grieving his mother who has just passed. An extract from her book A Home in Tibet tells of Dhompa’s own grief at having lost her mother, vowing to return her ashes to Tibet. Mothers, therefore, feature strongly in this collection, mothers who have been in exile and have not been able to return home.  Sonam’s poem ‘When was I Born?’, addresses the mother directly, asking her a seemingly simple question about when he was born. This leads to a series of memories revisited:

Was I born in the year the walls were pulled down?

That was the year when they ripped apart the prayer hall

What year was that?