A Parable of Our Times 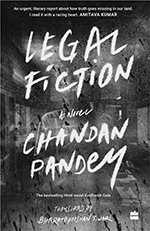 A Parable of Our Times
Meenakshi Shivram
LEGAL FICTION: A NOVEL by Chandan Pandey. Translated from the original Hindi by Bharatbhooshan Tiwari Harper Perennial, 2021, 158 pp., 299.00
July 2022, volume 46, No 7

The postscript to this novel says it is dedicated ‘to the brave Uttarakhand police officer, Gagandeep Singh, who saved a young man from a lynch mob’. This dedication indicates the story line that one can expect: it is about individual acts of courage against an establishment that is overwhelmingly powerful.

The timeline of the story is three days. On day one, the protagonist, Arjun, an author who is not yet thirty-three, gets a call from one of his ex-girlfriends telling him that her husband has disappeared. A reluctant Arjun travels to an insignificant town Noma along the UP-Bihar border and meets almost all the stakeholders of this unfortunate event. On day two, Arjun encounters the powers that be and learns about Rafique, the missing husband, through the latter’s diary. Day three is when the events are stitched together to reveal a malicious plot anchored by local goons, policemen, people in authority and hangers-on.

The story is about an activist playwright, Rafique Neel, who wishes to expose, through his street play, a local event where a young Muslim boy was to be lynched. The play could have the power to mobilize public support and bring the culprits to book. Rafique is a Muslim married to a Hindu, Anasuya. And soon a Hindu lady member of the theatre crew goes missing. The immediate narrative played out is that Rafique is a love-jihadi who has jilted one Hindu woman and moved on to his next prey.

There are fleeting moments of rare intensity that create a sense of hope about the narrative. When Anasuya, who is in her seventh month of pregnancy, goes to the police station to file an FIR: ‘…that constable who sat on the threshold, picked up his lathi and poked its lower end… against Anasuya’s belly. Twisting it hard, he asked menacingly, “how far along?”’ (p. 21).

This brief episode of police brutality appears as compelling as the one in Arundhati Roy’s The God of Small Things—where a policeman uses the tip of his baton to tap the complainant’s breast and calls her a ‘veshya’.

The world of the small town is also captivatingly described. If one thought of the small-town folk as illiterate and backward, the novel shows you how Facebook accounts and Twitter handles were a regular feature in this mofussil town.