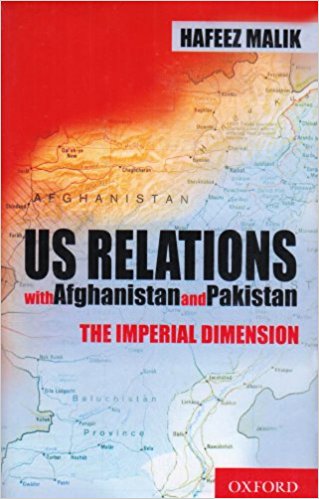 In August 2008, Pervez Musharraf resigned as the President of Pakistan. The US reaction has been one of muted praise for his role in the war against terrorism, even as it could do little to shore up his failing acceptability in the Pakistani polity. It is ironic that the US which had declared Musharraf to be the lynchpin of the apparatus to clean up Afghanistan and Pakistan of Taliban and Al Qaeda, later dumped him unceremoniously. Many see this as the old story when Pakistan and its leaders are used for the US interests being played out once again. It is no wonder that Hafeez Malik has placed his book on US relations with Afghanistan and Pakistan in the context of America’s imperial dimension. The US certainly cannot be termed an imperial power which conquers and then runs the affairs of conquered states for its own benefit. The book prefers to see the US as running an imperial system by regulating the affairs of the world politically, economically and through international trade.

One dimension of the US imperial system is the shifting preferences in allies, strategic partners and states which consent to be part of the system. Pakistan has viewed being part of the US led imperial system as a strategic necessity. The costs of this partnership have been high in terms of both its domestic and external policies and consequences.

The book posits the argument that Pakistan was roped into the security architecture crafted by US power in the 1950s. The discourse on an inconsiderate imperial system using and discarding Pakistan as it suited US interests is built on the premise