A New Theory of World Influence 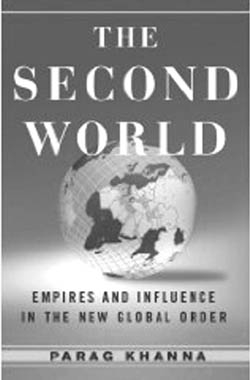 Khanna’s ambitious volume, freighted with a 23-page bibliography and 64 pages of substantive notes is, at first glance, highly ambitious. Endearingly, it also contains a very lengthy list of exceptionally enthusiastic acknowledgments—not all of them recognizing only the prominent and world-famous. The first book of an unusually gifted young Washington-based policy wonk who has risen fast to become the Director of the Global Governance Initiative in American Strategy Program of the New America Foundation (how these American titles, including increasingly those of tenured professorships, run on!) has already achieved a significant profile. Fluent, good looking, telegenic, self-confident, taking on the complacent at every turn—particularly in savaging American assumptions of never-ending world dominance—in no time at all Khanna has turned himself into a media phenomenon and an omnipresent denizen of the web. An unabashed name-dropper, Khanna and his works seem to have been blessed and helped along by the great and the good of the western establishment, particularly that of the USA. The cover of his volume declares it as a ‘New York Times Idea of the Year’ although it is not quite clear what idea this marketing tool proclaims—perhaps the catchy title.

But what about the book itself? While disappointing overall, notably in light of the relentless hype attending its publication, it offers genuine virtues, not least that it is well and clearly written. Khanna makes his meaning plain in every sentence. This is no slight praise, at a time when myriad volumes couched in social scientese defeat even the best-intentioned reader, seemingly daring her or him to call the bluff of authors proffering perhaps deliberately impenetrable prose. However, this admirable drafting, much closer to the craft of a high-quality journalist than that of the average scholar, also presents risks for the author.