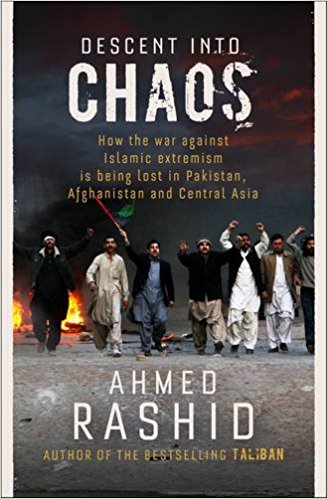 Unending Conflict
P.R. Chari
DESCENT INTO CHAOS: HOW THE WAR AGAINST ISLAMIC EXTREMISM IS BEING LOST IN PAKISTAN, AFGHANISTAN AND CENTRAL ASIA by Ahmed Rashid Allen Lane an Imprint of Penguin Books, 2009, 484 pp., 495
March 2009, volume 33, No 3

The subtitle of this book encapsulates its contents. Future historians will undoubtedly judge the eight year long George W. Bush era harshly as being America’s wasted years. Following 9/11, the responsibility for bombing the World Trade Centre towers in New York was affixed on Osama bin Laden and his al Qaeda organization hiding in Afghanistan. The US decision to bomb the al Qaeda camps was justified as a ‘self-defence’ measure under Article 51 of the UN Charter. This was followed by the al Qaeda and its ally—the Taliban (basically Pashtuns)—and their government being swept out of Afghanistan, and replaced by the Northern Alliance, headed by an Uzbek leadership. However, the ‘United States [thereafter] ignored consolidating South and Central Asia—the homeland of global terrorism—in favor of invading Iraq.’ The rest is history, but the result has been Iraq and Afghanistan-Pakistan, descending into chaos, presaging a further unravelling of the Gulf and Southwest Asian regions.

Ahmed Rashid is unsparing in criticizing the dramatic personae in this tragedy, with its many serious international implications. He primarily indicts the United States for discounting the Taliban threat and hoping it would help to destroy the al Qaeda, without realizing they are blood brothers in their Islamic and jihadist hatred of the West. This strategic error was compounded by the United States co-opting Pakistan and General Musharraf into its so-called ‘Global War on Terror’ in Afghanistan, and providing financial assistance (some $ 10 billion) to ensure Pakistan’s ‘sham’ support. The American preference for military regimes in Pakistan, despite the rhetoric about democracy, hardly needs any reiteration. The result has been the al Qaeda shifting its operational base from Afghanistan into the tribal areas of Pakistan, and the Taliban being unleashed into Afghanistan, obviously with Pakistan’s full knowledge and connivance. Pakistan has been designated, incidentally, as a ‘Major Non-NATO Ally’. The irony is surely unintended that this ally is supporting Taliban attacks from Pakistani territory upon the American and NATO forces fighting in Afghanistan. The further irony arises from what Pakistan has done to its own polity. Nurturing the Taliban to pursue Pakistan’s strategic ambitions in Afghanistan and Kashmir, and providing refuge to Afghan militants and al Qaeda extremists in Pakistan has fuelled an insurgency within Pakistan. Apropos, the Federally Administered Tribal Areas (FATA) in Pakistan, which lies between Pakistan and Afghanistan, has passed under Taliban control; they are launching attacks into Afghanistan and mounting suicide attacks into Pakistan. Pakistan’s North West Frontier Province (NWFP) is coming under increasing pressure, large parts of Balochistan are in revolt, and the prospect of Pakistan’s descent into chaos is no longer a theoretical possibility; indeed, Pakistan is increasingly being viewed as a failing, if not a failed state.

There is no question, but Afghanistan is no less a failed state than Somalia, according to the author. It is another matter that Afghanistan has been continuously at war since its Marxist revolution in 1978, and the FATA has been benignly neglected for centuries. Good parts of Afghanistan are beyond Kabul’s control, and are ruled by warlords, tribal chiefs, drug mafia leaders and similar lawless elements. Karzai, it is well known, has little control over the country beyond the immediate precincts of Kabul, and what little influence he possesses elsewhere is derived from cronyism and pandering to the very elements that are contributing to chaos in Afghanistan. Karzai is averse to political parties being allowed in Afghanistan, but, in their absence, parliamentary democracy cannot put down roots in that country. Moreover, as the author repeatedly emphasizes, U.S. and NATO policies for dealing with this situation is thoroughly confused. Bush’s penchant for unilateralism and military solutions was hardly designed to tackle Afghanistan’s myriad problems. NATO is no better. Each country in providing troops in Afghanistan has its separate rules of engagement, laying down caveats about what their troops can and cannot do in the fighting, and what should be done to stop the poppy production and drug trade. No coordination exists either between the military, civilians and NGOs milling around in Afghanistan.