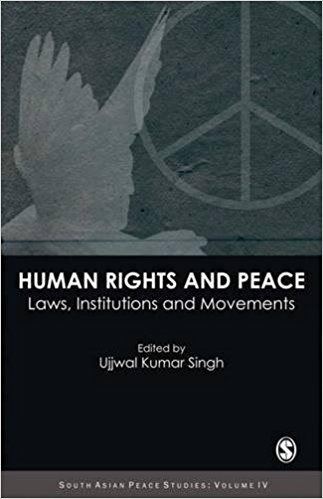 This is a timely volume of essays, significant in the context of the present times of unprecedented turmoil and a stealthy erosion of the rights and liberties of an ever-increasing majority, who as the editor rightly points out, continue to be rendered ‘rightless’, even amidst an ever-expanding range of human rights instruments and laws. This collection of essays paints a broad canvas of the multifaceted interplay of rights and peace and underscores the inextricable link between the two. It is a creditable attempt to redefine the limits imposed on ‘peace’ by dominant discourses, both national and international, which view it as a unidimensional function of security—to be achieved internationally, by ‘disciplining’ ‘recalcitrant’ states, fighting aggressive wars in the name of promoting democracy, and domestically, by criminalizing and brutally repressing dissent and quashing people’s rights through state instruments.

The book, divided into three sections, explores the various facets of the interaction between peace and human rights and their mutually reinforcing relationship. While the first section of the book ventures to broaden and deepen the hitherto narrowly-constructed conception of peace as the ‘absence of conflict’, the second weaves together accounts of people’s experiences with the laws and policies of the state introduced with the aim of providing ‘security’, have not only become the cause for much insecurity and resentment, but in the long term, seek to obfuscate the steady erosion of civil liberties and rights of the people.

The final section on ‘rights, movements, and institutions’, analyses the role played by institutions such as courts and human rights commissions in safeguarding rights and also their failures in acting as effective watchdogs against rights abuses, in addition to mapping the course of human rights movements in India through different time periods.