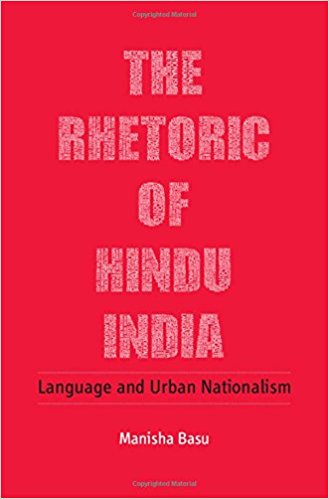 The politics of Hindutva has created its hegemony in Indian politics in the recent past, particularly after the 2014 general election. Prime Minister Narendra Modi has emerged as a popular and strong leader, who has not only made his mark in the rural areas of different States (particularly North and West India) but also created a huge fan following in urban areas and within the Non-Resident Indian (NRI) communities in different countries. Indeed the rising popularity of Hindutva ideology in urban, technologically sound, and English educated youth is phenomenal. The book under review, The Rhetoric of Hindu India, examines the late twentieth century rise of an urban, Right Wing Hindu nationalist ideology through the writings of many writers/columnist. They have presented an extensive analysis of diverse shades of Hindutva for global English speaking readers.

The book analyses the new intellectual structure which plays a crucial role in the normalizing of the ideology of ‘Hindutva’. Manisha Basu has read the writings of many public intellectuals including journalists, think-tank economists, politicos and fiction writers. Arun Shourie, Jay Dubashi, Francois Gautier, Swapan Dasgupta, Chetan Bhagat and Amish Tripathi are these intellectuals. The writer accepts that this is not a ‘large sample’ but she argues that she keeps the number down, ‘so as to be able to pay close attention to illustrative examples of each author’s range of works’ (p.xi). It should also be noted that the agenda of the BJP’s Hindutva has always prevaricated on the question of language policies. However, there are those in its ranks that push towards, ‘Angrezi hatao’ (Ban English) movement, and others, ‘who recognized the importance of the Anglophone allegiance…’ (p. 138). And this study presents the complex arguments of some of the important writers of the latter group.