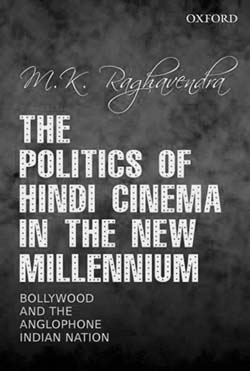 When M.K. Raghavendra declares in his recent book The Politics of Hindi Cinema of the New Millenium: Bollywood and the Anglophone Indian Nation that ‘Bollywood is not mainstream Indian cinema’, he ruffles quite a few feathers. This book by the Bangalore-based author can in many ways be seen as a natural extension of his previous book, Seduced by the Familiar: Narration and Meaning in Indian

Popular Cinema, where he had interpretatively looked at the films from 1947 until the start of the new millennium and in this book he starts from where he left off. This time he tries to understand the politics of practice and the resultant emergence of the ‘asymmetric nation’ in the films of the post-globalization age. He reasons how this change can be corroborated by the growing
authority of the ‘Anglophone’ public. By ‘Anglophone’ he indicates the section of privileged, English-speaking, urban classes whose
increasing numbers in real life lead to a corresponding increase in their representation in the popular Hindi films of the new millennium.
In Raghavendra’s new book, the underlying sentiment is the erosion of many facets of the Hindi ‘national’ cinema from the popular films of the 21st century as compared to their predecessors. Through the book, he analyses numerous popular films of this period and studies the correlation between a changing nation and its evolving films which reflect that change through their political rhetoric. In order to do so, he divides the book into fifteen chapters each dealing with one specific theme and the set of problems they promulgate. The themes range in diversity from the adulterous women in films like Jism (2003) and Kabhi Alvida Na Kehna (2006) to agrarian issues in films like Peepli (Live) (2010). Some of the problems that he identifies through other films which are included in his book such as Rang De Basanti (2006), Bunty Aur Babli (2005) and Lage Raho Munna Bhai (2006) are the gradual weakening of the inclusive community, the increasing aspirations to enterprise and the acceptance of illegalities in the face of personal gain.
Raghavendra’s primary concern, which he announces in his introduction when he says that ‘. . . cinema shows us new ways in which political issues can be understood’, is the impression the politics of the new millennium had on the Bollywood films post 2001. He intentionally refuses to take recourse to a theory-laden approach to this phenomenon and prefers to focus only on political interpretations of the films, steering clear of an ideological reading. This approach, however, raises the question of whether a political interpretation can truly be bereft of ideological underpinnings. He foregrounds the book in the introduction in much detail but his subsequent treatment of the arguments in the individual chapters lack the expected rigour. A consequence of the relatively broad layout of book is that the understanding remains an ‘instance in broad generality’ and the problem in imbibing his arguments is that they fall short of the depth which he initially seemed to hint at. For example, he draws the formation of the asymmetric nation in most of the films he studies but restrains himself from a thorough exploration of the tenets that define this ‘asymmetric nation’. Has it only to do with a cinema that caters to a specific group, in this case the Anglophone? What are the Anglophone cinemas? Is the rise of the globalized audience the only reason for this change?
The book pays immense attention to the idea of an ‘asymmetric nation’ propagated by the films of the 2000s and compares them with films made between 1947 and 2000. He places the disappearance of loyalty, endorsement of illegality and the desirous aspiration, and profit as a legitimate end to be characteristics of the ‘asymmetric nation’. He clearly demarcates between the Bollywood films and the mainstream films when he says that ‘Bollywood is not mainstream kind of cinema’ but does not delve much into the intricacies that lead him to this conclusion. He also looks at contemporary mainstream Bollywood and the change in audience demographics leading to the aforementioned trends with which he clearly seems to be miffed. Much has been written on the subject of changing times and their reflection in the kind of films that are generated and Raghavendra extends this argument with some fresh insights. For example, he hypothesizes on how the B-films of the 1960s can be seen to exhibit a limited national space as they addressed only a specific target audience. He compares this to the mainstream films of the contemporary period as they seem to be made with only the metropolitan audiences in mind and hence exude a politics that relies on erasure of elements related to Nehruvian socialism since they conflict with the demands of a liberalized nation. Raghavendra also points out certain aspects of Bollywood in the new millennium which were not visible in Hindi mainstream cinema of an earlier age such as the deracinated global Indians failing to identify as a community, the absence of the narratives of the poor in Anglophone cinema and ‘thieving as the natural logic of globalization’. The ‘dissolving nation’ that gets defined through these aspects, according to him, can be seen ‘to allegorise the historical circumstances of the present in the language of the familiar myth’.
For readers who are initiating their understanding of popular Hindi cinema of the new millennium and want to comprehend the political exigencies which underline them, this book should be an interesting read. Raghavendra’s intention of ensuring that the book is not too theory-laden means that it follows a bottom up approach and espouses the very philosophy that he writes about. With the rise of the Anglophone audience, Raghavendra notices the loss of the traditional cohesiveness and the waning sense of morality in the films of the new millennium. By not adopting a rigid theoretical framework and thus not limiting himself to an ‘exclusive’ readership, he perhaps intends his work to be an allegory for the very notion of lost inclusivity that he propagates.

Sagorika Singha is a research scholar in the School of Arts and Aesthetics, Jawaharlal Nehru University. Her areas of interest are cinema, subculture, gender and queer studies. She lives in New Delhi.