Indian Rail: Past and Present 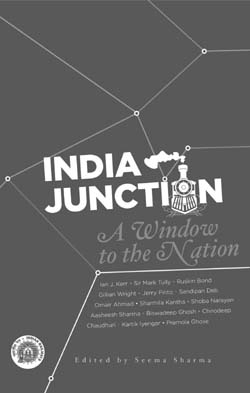 This anthology brought out by the Ministry of Railways is an eclectic collection of articles by several authors—Sir Mark Tully, Ruskin Bond and Sandipan Deb and experts on the Indian Railways such as Ian Kerr. The result is a series of articles of varying quality. It is true that any detailed description of the history of the railways or its impact on India would be a massive work. Where this anthology succeeds is giving the reader a quick introduction of the various themes revolving round the railways which may inspire him to delve further.

While some of the writers clearly know their subject, the same cannot be said about all the writers. Sharmila Kantha gives a good summary of the economic and sociological impact of the railways on the country, while her second article looks further into the economic aspects of how the railways would develop.
Jerry Pinto gives a good account of the railways in Indian cinema. Biswadeep Ghosh’s article on the spirit of the railways is also worthwhile.
The last section on ‘Travelogues’ is more variable in quality. Those familiar with the rail network will finds some basic mistakes here, such as the Kangra Valley line being described as a metre gauge line and a mention of a station called Maranda which has never been listed in the timetable.
There is a series of pictures of the past and present of the railways, many of which have not been widely published before. The selection of pictures has been done well in that many of them depict unusual settings or subjects which catch one’s attention.
To sum up, this is neither a detailed academic work nor really aimed at the ordinary reader. One may say that it falls between two stools.

Ajai Banerji is presently an investment manager with an interest in the history of transportation in India (particularly aviation and the railways). He holds degrees from IIT Kanpur, IIM Ahmedabad and Stanford University. He was the winner of BBC Mastermind India title in 1999.