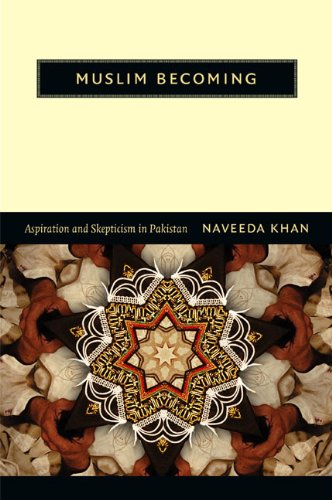 I wanted to learn what it meant to know Islam in Pakistan and why this knowing was so easily brushed aside.

Naveeda Khan’s book Muslim Becoming is a welcome addition to the rather scant literature on Islam, identity and Muslimness in contemporary Pakistan. Khan begins by presenting a debate between four librarians of differing religious persuasions. Deep within the stacks of the Provincial Assembly Library, four men take part in a discussion that highlights the marked differences in their belief systems. Of the four, one is a Shia and the other three Sunni. Among the Sunnis, one identifies himself as a Deobandi, one as a follower of Ahl-e-Hadis sect, and the third as a Barelvi. Akbar, the follower of Ahl-e-Hadis school of thought, speaks at length of the superiority of their mosques as ‘they allowed laymen to give sermons and encouraged women’s participation in congregational prayer’. Despite his reverence for mosque culture, Akbar is derisive of the thought of praying at the Prophet’s mosque in Medina.