Of Older Traditions of Scholarship 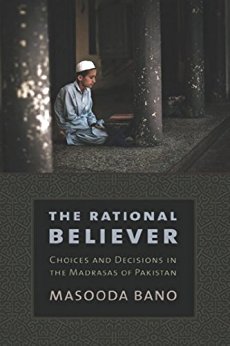 Of Older Traditions of Scholarship
Arshad Alam
THE RATIONAL BELIEVER: CHOICES AND DECISIONS IN THE MADRASAS OF PAKISTAN by Masooda Bano Cambridge University Press, 2013, 250 pp., 250
October 2013, volume 37, No 10

Commenting on the congruent genealogies of Oxford and the madrasas of South Asia (‘religious’ origins of both sets of institutions) and the eventual divergence (Oxford emerging as the fountainhead of ‘reason’ and madrasas positioning themselves as bastions of ‘orthodoxy’) between them, Masooda Bano argues that the main reason for the different development of these institutions was that they were operating in very different political environments. Thus the Oxford dons, in primarily catering to the emergent concerns of an industrial society were interpreting religion to suit the requirements of modernity while the Ulama, thoroughly marginalized due to colonialism, were charting a course of an ossified, non-integrationist Islam. The problem with Masooda Bano’s rather sweeping argument is that she has nothing to say about the more dominant integrationist strands within South Asian Islam. Her central frame, where she first categorizes religion as non-rational and then goes on to prove the rationality of Islamic institutions and actors is equally problematic.